A Fine Night of Debauchery

Javier: "And... how exactly are we getting out of here?"
Arthur: "I ain't too sure. This is what tends to happen when you leave Trelawny in charge of planning. All garnish, no meat."
―Javier and Arthur

A Fine Night of Debauchery is a mission in Red Dead Redemption 2.

While at the Mayor's party, the Van der Linde gang learned of a poker tournament being held on the Grand Korrigan riverboat at the docks in Saint Denis. Leopold Strauss and Josiah Trelawny fix a game so Arthur Morgan can win big on the tables.

After arriving, Arthur leaves his weapons in the carriage, and walks to the boat along with Trelawny, Strauss, and Javier Escuella. Once on the boat, the four split up, while Arthur heads to the tables. He starts playing, with Strauss subtly conveying what he should do. With Strauss' help, Arthur quickly becomes the only player in the game besides Desmond Blythe, who causes the other players to go bust. Arthur beats Blythe in the next round, but Blythe challenges Arthur to a second game, putting his Reutlinger Pocket Watch on the line. Arthur accepts, and quickly beats Blythe again. The pit boss congratulates Arthur on defeating Blythe and takes Arthur upstairs to the vault, with Javier leading the way, pretending to be a guard. Once the safe is open, Javier knocks out another guard, and holds a pit boss at gunpoint. Arthur disarms him, but while looting the safe, it is revealed that he had another gun.

Arthur quickly kills him and loots the safe, and the duo move back to the bar, where Blythe is seen talking to Trelawny and accuses Arthur of cheating in the game. Eventually, the guard whose clothes were taken by Javier appears and yells for the latter to be shot, causing a gunfight to erupt. After fighting their way to the deck, Arthur, Javier, Strauss, and Trelawny jump off the boat and swim to shore. After Strauss confirms that the stolen watch is valuable, Arthur takes it back, and the group split up. 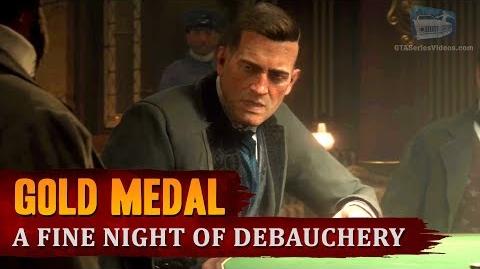