A Fork in the Road

Red Dead Redemption 2 mission
A Fork in the Road

N/A
A Fork in the Road is a mission in Red Dead Redemption 2.

Once Arthur arrives near the mission area, in Saint Denis, he suddenly starts having a major coughing fit until he passes out. He wakes up to find a stranger dragging and helping him to the doctor's office, where he is greeted by a spooked receptionist, prompting her to call on Doctor Joseph R. Barnes, who brings him to his surgery room. Before he starts examining him, he asks for a payment in order to help him, which Arthur quickly gives.

After an examination of his ear, breathing, and mouth, Arthur is then given the diagnosis of tuberculosis. Upon hearing the bad news, Arthur expresses disbelief. The doctor informs him that tuberculosis is a progressive disease, and gives Arthur advice to go somewhere warm and dry. Arthur responds with sarcasm and says it isn't possible, then begins to get up and leave.

Before leaving, Dr. Barnes injects a syringe with steroids into Arthur's arm, in order to give him "a little bit more energy" for the day. Arthur subsequently exits the surgery and falls into a trance, remembering various quotes from people that differ according to Honor level.

High Honor: The colour scheme of Arthur's trance is golden yellow, reflecting sunlight. The quotes Arthur recalls are positive, reassuring and reflective, with somber music. At the end, Arthur sees a buck in the distance that gazes at him before running away and disappearing.

Low Honor: The colour scheme of the trance is grey, reflecting fog. The quotes that Arthur recalls are negative, foreboding and defeatist, with ominous music. At the end, Arthur sees a coyote gazing at him in the distance before scarpering away and vanishing. 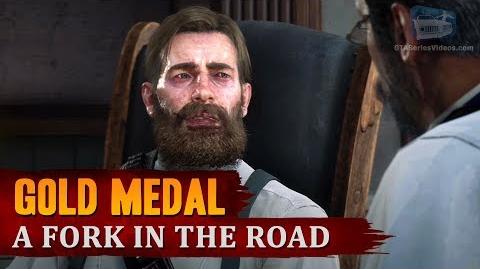