Red Dead Redemption mission
A Frenchman, a Welshman and an Irishman

A Frenchman, a Welshman and an Irishman/dialogues

“When a man with a sing-song voice tells me to 'fuck off', it always concerns me, 'boyo.'”

A Frenchman, a Welshman and an Irishman is the nineteenth mission in Red Dead Redemption.

John finds Irish having his head dunked in a horse trough by two men intent on killing him. After he has killed the two men, John asks Irish if he might know the location of a Gatling Gun needed to assault Fort Mercer. When Irish responds that he knows the location, they travel to a shack, where Irish disappears at the sight of guards.

After the cutscene ends, both French and Welsh will become hostile and must be killed. Be careful as Welsh has a knife. One strategy is to quickly switch to Dead Eye mode to kill them both; another is to wait for them to charge you, which affords an immediate opportunity to perform an execution or two. Once they are dead, another cutscene will be triggered where Irish explains that he knows where to find a Gatling gun. After that, the player must follow Irish to the cliff where yet another scene will be triggered. When it's done, the player will need to fight their way to the house, where there will be six enemies. They are easily finished off through use of cover and the Dead Eye ability. Once at the house the player needs to be careful as an enemy will come out wielding a Double-barreled Shotgun that might finish off an unaware player. After that, all the player needs to do is walk into the house to complete the level.

Main article: A Frenchman, a Welshman and an Irishman/dialogues

"Fuck off, boyo, this don't concerns you!"

"Look here, this paddy bastard stole our guns, tried to steal our horses..."

"The law's clear on the matter!"

"I never stole nothin', sir! Never did, not in all me life!"

"That French cunt is playing with the Welshman's tiny and ineffective mind!"

"Mr. Nigel West Dickens told me you could help me locate a machine gun."

"It's not here! That lying sack of shit!"
Add a photo to this gallery 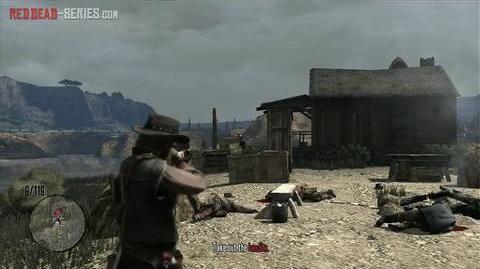 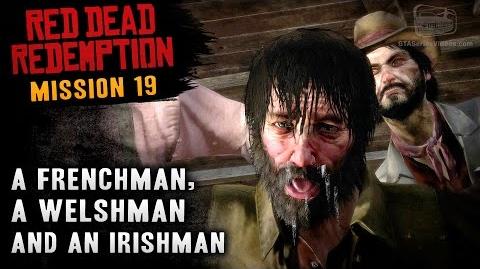 Red Dead Redemption - Mission 19 - A Frenchman, a Welshman and an Irishman (Xbox One)
Remastered Version

Retrieved from "https://reddead.fandom.com/wiki/A_Frenchman,_a_Welshman_and_an_Irishman?oldid=388161"
Community content is available under CC-BY-SA unless otherwise noted.