N/A
A Kind and Benevolent Despot is a mission in Red Dead Redemption 2.

This is also the first mission where Arthur shows symptoms of Tuberculosis.

With the help of a local, Gloria, Dutch and Arthur infiltrate Fussar's compound to rescue Javier.

Arthur meets Dutch near the entrance of a cave, where the duo are greeted by a woman named Gloria, who Dutch pays in gold to guide them through the cave to an entrance. Upon reaching a ladder, the woman demands more money, but Dutch had already paid her with the last gold bar he had. She pulls a knife on him, but she is choked to death by Dutch, much to Arthur's shock and dismay.

The duo then climb up the ladder, and see Javier being dragged by a donkey and mocked by Colonel Fussar and his soldiers. After killing two guards, they sabotage the compound sugar production, ripping open bags of sugar and setting the place on fire to create a distraction. After the building explodes, they free Javier, and fight their way out of the compound. With Dutch carrying Javier, they run through the sugar fields while Arthur holds off the men chasing them. They cross a small stream, and Dutch and Javier tell Arthur to hold off the men, then meet them at the fortress in Cinco Torres. Arthur kills the last of the men, and departs for the fortress. 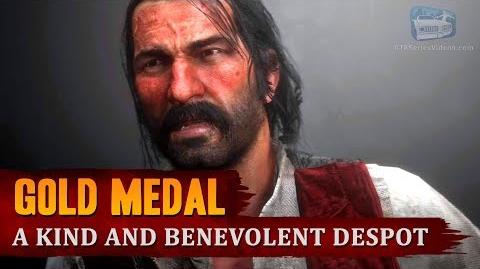 Retrieved from "https://reddead.fandom.com/wiki/A_Kind_and_Benevolent_Despot?oldid=412344"
Community content is available under CC-BY-SA unless otherwise noted.