A New Jerusalem is a mission in Red Dead Redemption 2.

John puts together his pre-cut ranch house with the help of Charles and the encouragement of Uncle.

John, Charles and Uncle decide to work together to assemble the house. Uncle uses his 'terminal lumbago' as an excuse to get out of doing the actual work and instead contents himself with giving the orders. John and Charles assemble the house over the course of several weeks - first placing the joists to build the foundation, then hammering in the joists, raising the house frame and finally placing the tiles for the rooftop. Once the house is finished, John writes a letter to Abigail informing her of his newly-purchased land and house, and trying to convince her that he has changed his former ways. 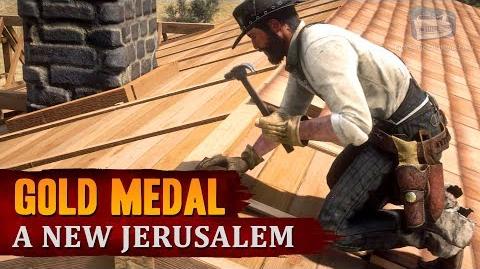