A Quick Favor for an Old Friend is a mission in Red Dead Redemption 2.

With his debts mounting and a barn to buy, John accompanies Sadie to hunt down the wanted criminal, Ramón Cortez, and bring him to justice.

John finds Uncle resting under a tree. John yells at Uncle for being lazy and Uncle asks John if he believes in reincarnation and John states that he does not believe in that. Uncle complains about his condition, but John tells him to help out with farming. Uncle tells John that the land is good for grazing and suggests that John will need to get a barn if he wants to buy livestock. John believes that building a barn will take at least six months and Uncle suggests that John could buy a pre-cut barn. John and Uncle head to over to the lumber yard. John greets Albert Cakes and tells him that he needs a barn. Albert opens a catalogue of pre-cut buildings and John picks out the barn. John and Uncle thank Cakes for the help.

John and Uncle head to the bank, Ansel Atherton tells John that he wants to help him but can not help give him another loan and Atherton gets annoyed by Uncle's behavior. John and Uncle leave and John yells at Uncle for being annoying to Atherton. Sadie appears and greets them. John asks Sadie if she has any work as he needs money to pay off his loan to the bank. Sadie states that she has a job and it's dangerous. Sadie lets John join her. Sadie states she received a bounty she is after is located at Painted Sky. She states that she received a tip from an encyclopedia salesman, who went to the property to look for the rancher to sell an encyclopedia, but saw a Mexican man on the property. Sadie tells John that the bounty she is going after is Ramón Cortez, a wanted Del Lobo gang member. Sadie and John talk during the travel. Once they arrive at Painted Sky, Sadie suggests to John to split up. Sadie heads to the house while John heads to the barn.

Sadie finds Wróbel tied to a chair and she unties him. Wróbel states that Cortez is hiding in the barn. When John enters the barn, Cortez ambushes him and the two men fight. John defeats him and Cortez surrenders. Sadie rushes over to John and hits Cortez with her shotgun. John carries the unconscious Cortez and places him on Sadie's horse. Sadie tells John that they are going to Scarlett Meadows Sheriff's Office in Rhodes. John is surprised by this and Sadie states that the environment there has changed. Cortez wakes up and attempts to bribe them to let him go and Sadie tells him to shut up.

They eventually arrive, Sadie heads to the sheriff office and tells John to bring Cortez. Cortez attempts to bribe John to kill Sadie, but John tells him to shut up. Sadie greets Sheriff Thomas and tells him that they have Cortez. Sheriff Thomas is pleased that they were able to capture Cortez. John places him into the cell and Cortez attempts to bribe all of them to let him go. Sheriff Thomas tells Cortez that he and his deputies are taking him to Saint Denis to be hanged for his crimes. Sheriff Thomas tells Sadie and John to help him guard Cortez until his deputies arrive. Sheriff Thomas offers the two drinks and Cortez is seen laughing inside his cell. John and others wait for the deputies. It becomes nighttime and Sadie and John rest.

Sadie notices that they are waiting for a boat. Sadie tells John she is going down to the campsite and that she will take care of the gang members. John provides sniper support from the mill and Sadie then calls to John to come down to help her. Sadie and John fight the gang members and they notice that Cortez is escaping in a row boat. John shoots at the boat, which forces Cortez to row the boat back to land. John ties Cortez up and John notices more gang members. Cortez sees them and calls out to them in Spanish. They defeat the remaining gang members and take Cortez back to Rhodes. Sadie calls out to the sheriff that they got him and John hands over Cortez to the deputies. Cortez is placed in a jail wagon. Sheriff Thomas tells them that they will get their money once he and his deputies arrive in Saint Denis. The sheriff and deputies leave with Cortez. Sadie thanks John and John asks her to send his money to the bank. 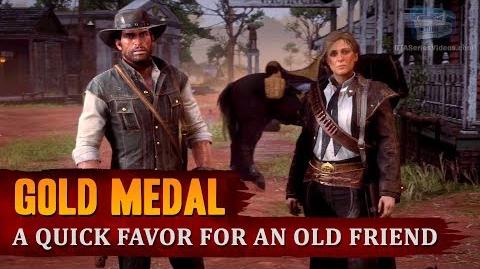 Retrieved from "https://reddead.fandom.com/wiki/A_Quick_Favor_for_an_Old_Friend?oldid=418121"
Community content is available under CC-BY-SA unless otherwise noted.