N/A
A Rage Unleashed is a mission in Red Dead Redemption 2.

Eagle Flies and the gang launch a raid on an army boat, to reclaim horses stolen from the Wapiti Reservation.

In camp, Arthur approaches Reverend Swanson, and the two have a brief conversation. They are quickly interrupted by Dutch, who calls Arthur over to him. Dutch discusses his ideas regarding robberies and making the gang money, while Arthur instead says that the gang are "not so good at doing scores anymore", and is doubtful of Dutch's plans. Suddenly, they are interrupted with the arrival of Eagle Flies, who is escorted into camp by Karen and Javier. Eagle Flies explains the the US Army have confiscated his tribe's horses, and that his people will "starve" if he doesn’t retrieve them, before going on to denounce the abduction of said horses as an "act of war". Charles Smith tells him that, as he promised Rains Fall, he will not get involved in this conflict. Meanwhile, Dutch spontaneously decides to help him, and tells Eagle Flies to put his money away. Suspicious of Dutch's motives, Charles and Arthur decide to accompany the pair.

The group ride southeast, near to Copperhead Landing. On the way, Arthur questions Dutch on why he is helping Eagle Flies with this, despite seemingly having nothing to gain from it. Dutch, however, brushes this off and reminds him of the gang's motto, before later telling him that interfering in the Indians' conflict with the Army may divert attention away from the gang. The group arrive at their destination, and meet up with a few other Wapiti men, including Paytah. Before starting their mission, the group decide to wait until nighttime in order for them to sneak aboard the boat more easily thanks to the darkness.

With the arrival of night, the group silently row towards the ship which is carrying the horses, and quietly board it. Once on it, they stealthily neutralize the soldiers on-board, including a group playing poker. Once this is done, Dutch begins to drive the ship towards the land. Unfortunately, though, he loses control and accelerates rapidly, before crashing. As a result, the ship begins to take on a large amount of water, and the gang are forced to free the horses and swim with them back to land. After leading most of them back to the riverbank, Eagle Flies asks Arthur to round up the remaining few. Arthur mounts one of these horses and, while leading two others, gets back to land by riding the swimming horse. Upon arriving at the shore, Dutch offers to ride with Eagle Flies to take them back to the reservation. After the two ride away, Charles asks Arthur to go and visit Rains Fall, which the player can either accept or decline. 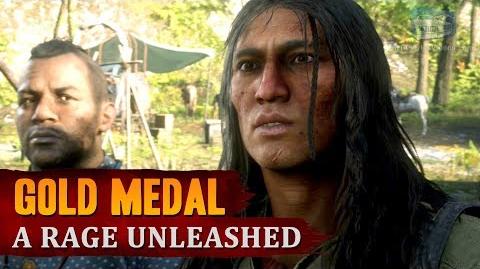 Retrieved from "https://reddead.fandom.com/wiki/A_Rage_Unleashed?oldid=401211"
Community content is available under CC-BY-SA unless otherwise noted.