By 1907, Abe worked as a ranch head for David Geddes on Pronghorn Ranch, a relatively new ranch in West Elizabeth.

In 1907, John Marston (under the pseudonym "Jim Milton") begins to work at Pronghorn under the guide of Abe and the ranch foreman Tom Dickens. During John's stay, Abe shows him around the ranch and assists him in milking cows.

At some point, the Laramie Gang and its leader decide to visit the ranch. The leader of the gang harasses and threatens Abe to convince his boss David Geddes into sell the ranch. John intervenes and tells gang leader to leave Abe alone. John provokes a fight with the gang leader and defeats the Laramie gang's leader. The gang leader states that he and his gang will return, before riding off the ranch. Abe then thanks Marston for his help.

Later that night, Abe helps Marston and Tom Dickens in repelling a Laramie gang attack, and the three are successful. When they arrive back at the ranch after an assault on the Laramie gang's hideout, John asks Abe to stay up just in case there is any more trouble, and to fire his rifle three times if he needs help.

Over the next few months, Abe continues working at the ranch. He is seen assisting John with various jobs on the ranch during the latter's time as a worker.

After John formally moves away from Pronghorn Ranch and purchases his own land at Beecher's Hope, Abe is not seen again; it is presumed that he continues working at Pronghorn Ranch as a hand. 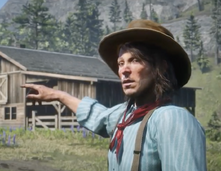 Abe being threatened by the Laramie gang leader