With the addition of the Liars and Cheats DLC pack, Abigail Marston is also a multiplayer character model that may be selected in the 'Redemption' section of the Outfitter.

Abigail Marston was born in 1877 as Abigail Roberts. An orphan, Abigail eventually became part of the Van der Linde gang after being introduced to them all by Uncle in 1894. As a prostitute, she slept with most of the members of the gang, but ultimately fell in love with John and fell pregnant with their son, Jack, when she was only eighteen. She and John later also had an unnamed daughter, sometime later. John temporarily left the gang for a year or so when Jack was around one year old, but later returned. Abigail cared for John deeply and tried to get him to show more interest in their son, Jack. This resulted in arguments between the two, however, as John wasn’t convinced that Jack was his and wasn’t interested in family life.

Abigail first appears after traveling with the rest of the Van der Linde gang through the mountains following their botched ferry heist in Blackwater, taking shelter in an abandoned mining town. She points out that Davey Callander had succumbed to his wounds. Not long after, she reluctantly requests that Arthur Morgan go out into the snowstorm and bring back John Marston, and after some convincing from Hosea, he grudgingly agrees and ventures out with Javier Escuella. When John is returned, she scolds him for his actions. Soon before the gang robs a Leviticus Cornwall train, she and Jack visit John, and Abigail becomes angry at John’s lack of interest for their son.

Abigail asks Arthur to take Jack out fishing, concerned that her son is bored at the camp.

Abigail becomes horrified when Jack is nowhere to be found, and learns that Jack was abducted by the Braithwaites. Dutch promises to bring Jack back to her, and she becomes horribly distraught when the gang learns he was not at the manor.

After Arthur, John, and Dutch succeed in getting Jack back from Angelo Bronte, she rushes over to Jack and throws a party in celebration of his return.

Along with Hosea, Abigail has the job of distracting the guards during the gang’s robbery of Lemoyne National Bank. Although Hosea gets captured, she manages to escape.

In the aftermath of the botched bank job, Abigail learns that John was arrested is sentenced to be hanged. Abigail pleads to Dutch to save him, but to no avail. She turns to Arthur and Sadie Adler to rescue John, to which they accept. On the day of the breakout, Abigail asks to join them both in rescuing John, but they refuse, saying that she'd just become another thing to worry about. She reluctantly agrees, and thanks them both. When John returns to camp, she embraces him out of relief. Having grown fearful for Jack and at the behest of John and Arthur, Abigail begins looks for Dutch's money stash so that they can escape.

During the train robbery, Abigail gets kidnapped by Agent Milton. As the rest of the gang decided to leave her, Arthur and Sadie rush to her rescue. Sadie also gets captured by Milton during the rescue attempt, before Arthur comes in and starts to free Abigail, only to be held at gunpoint by Agent Milton. After Milton reveals that Micah betrayed the gang to the Pinkertons, he and Arthur end up in a struggle, which is resolved when Abigail manages to break free of her confinements and subsequently shoots Milton in the temple with Sadie’s revolver, saving Arthur. As the trio ride back, Arthur informs Abigail that John has seemingly died, causing her to weep. Arthur also tells Abigail and Sadie to go to Copperhead Landing, where they will find Jack and Tilly. Arthur bids them farewell but, before the two depart, a tearful Abigail gives Arthur the key to the chest containing the gang's money, and Arthur compliments her skill as a thief.

Abigail is next to John on the wagon in the first scene of the epilogue, berating John for shooting someone, which forced them to upend from their previous residence. They decide to go to Strawberry, due to Abigail claiming that people there are reportedly honest and hard working. Once they arrive, she and Jack get a job cleaning the doctor's surgery in the town. After John gets a job as a ranch-hand at Pronghorn Ranch, she moves with the rest of the family into a cabin that the owner lets them use. An uneasy relationship between the two comes about and Abigail soon begins to worry about Jack, requesting that John takes him out riding. She also sets her sights on a plot of land for sale known as Beecher's Hope.

However, despite Abigail's wishes for John to avoid fighting, John continued to do so, attacking the Laramie Gang and, at one point, killing road agents in front of a horrified Jack. This leads to Abigail becoming frustrated with John's failed promises and as a result, she takes Jack away and leaves John, who becomes regretful.

John writes a letter to Abigail asking her to come back, and says that he has bought the ranch she wanted and constructed a place for them to live. She returns with Jack, and begins filling with joy when she sees what John has done with the originally-barren plot of land. However, this joy turns to worry as John continues to hunt bounties with Sadie to make some extra money. Despite this, she loves John more than ever, and goes on a trip with him to Blackwater. The two get their picture taken, go to the cinema, and go rowing on the lake at sunset, where Abigail accepts John's marriage proposal. Shortly afterwards, John goes with Sadie and Charles to kill Micah despite her pleas for him not to, but he returns safely and the two subsequently get married. After the wedding, Sadie and Charles depart, and Abigail tells John that they have a lot of work to do in order to keep the ranch going.

After four years of peace on the ranch, Abigail and Jack are abducted in 1911, by Edgar Ross and agents of the newly appointed Bureau of Investigation. John is extorted into seeking out his former comrades throughout New Austin, Nuevo Paraíso and into West Elizabeth before their eventual release. During their time in captivity, Abigail stresses how difficult it was for Jack. She also hints that a guard made sexual advances but, with a little prompting on Mrs. Marston’s side, regretted that decision and no one tried it again.

Upon John's return to the ranch, Abigail criticizes him for having left, afraid that he had rejoined the gang. He assures her that that life is over and things on the ranch return to some level of normality.

While cooking, Abigail hears the sound of crows attacking the ranch's grain silo, and asks John to get rid of them once and for all. Later, Abigail receives a telegram from Bonnie MacFarlane telling them about the crops they lost from pests. She goes out with John to meet Bonnie, worried that John may be cheating on her. Abigail discovers that this is not true, and says afterwards that she liked Bonnie.

At some point afterwards, the ranch is assaulted by Edgar Ross and a large contingent of US Army soldiers and lawmen. Uncle is killed in the initial assault, with Abigail and Jack fleeing to the barn alongside John. John demands that Jack ride Abigail to safety, saying that he will catch up. Accepting the realities of John's imminent sacrifice, Abigail and John declare their love and kiss before John sends the horse out the back door of the barn.

John exits the barn and is confronted by a large firing squad, where he is shot and killed in a showdown by their overwhelming numbers. Hearing the gunshots cease, Abigail demands that Jack returns to the ranch. There, they find John's bloodied body, peppered with bullet holes. Abigail is seen mourning the loss of her husband, clinging to Jack for support.

In 1914, Abigail Marston dies at approximately 37 years of age from unknown causes, and Jack buries her on the hill of the ranch next to John and Uncle.

During the Undead Nightmare DLC, John is in his house with Abigail and Jack. They are all talking about general things, like a book Jack is reading, however they mention that Uncle hasn't returned from what he was doing yet. Abigail states that, because of the storm, Uncle has probably taken shelter in a dry place nearby and will stay there until the storm subsides.

Later, when John and Abigail are in bed, an undead Uncle tries to attack them and John beats him back with a lamp, seemingly killing him or knocking him out. Abigail shows disgust at the bloodied body and turns away, sickened. John runs to get his gun from the barn, but when he comes back, Uncle has attacked Abigail and is biting her in the neck. John shoots Uncle in the head and tends to Abigail.

At John's call, Jack comes outside and sees Uncle's corpse, but is preoccupied with his mother's state. He runs to help his mother despite John's warning, however, Abigail turns to a zombie and bites Jack, turning him into an Undead as well. John runs to fetch his lasso from the barn and he then hogties both of them and after giving them both a plate of food, he leaves them in the house and sets out to find a cure.

Abigail is shown to be a motherly and protective woman. She's strong-willed, independent, and loves her family dearly and can be quite strict at times. She often finds herself at odds with John, disliking her husband's habits of endangering himself and the family in the name of revenge and redemption, not wanting to become a widow and more importantly, leaving their son fatherless.

In 1899, Abigail is a young woman with blue eyes and dark hair, which she wears tied in a bun. Abigail usually wears a light brown or blue blouse, a worn-looking black belt with a golden buckle, a dark blue or green skirt, and a black boots. At the Horseshoe Overlook camp, she may also wear a checked grey and white, knee-length coat. At Colter she wears a checked grey and white knee-length coat, a grey scarf, a black belt with a silver buckle and a dark brown patterned gloves. During a bank robbery in Saint Denis, Abigail wears a pretty steel blue dress with a white patterns, a dark blue belt with a bow, a beige hat with a blue band with a bow, and a dark blue gloves.

Her appearance is relatively similar in 1911, where she instead wears a worn-looking, checked beige and brown skirt, a dark blue blouse, a light green shirt, a black belt, and a white boots. 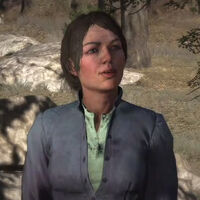 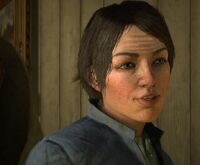 Abigail, John and Jack Marston.
Add a photo to this gallery

Abigail as a Redemption Multiplayer skin.
Add a photo to this gallery 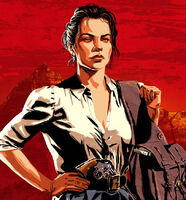 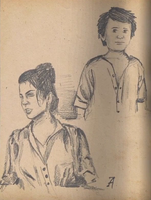 Arthur's drawing of Abigail and Jack

Abigail with John and Jack at camp 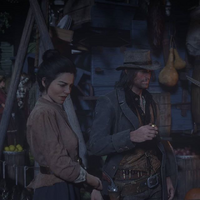 Abigail and John at Shady Belle 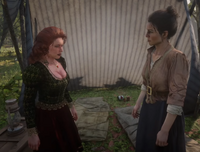 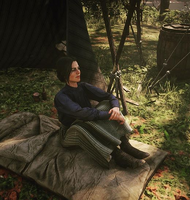 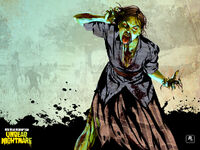 Retrieved from "https://reddead.fandom.com/wiki/Abigail_Marston?oldid=376882"
Community content is available under CC-BY-SA unless otherwise noted.