With the addition of the Liars and Cheats DLC pack, Abraham Reyes is also a multiplayer character model that may be selected in the 'Damnation' section of the Outfitter.

Abraham Reyes was born to a very rich family and had a wealthy upbringing. According to him, his nursemaid used to tell him when he was little, "Abraham, one day, everybody will know your name." Abraham Reyes was the son of a Mexican nobleman and attended schools in both Mexico and Europe, and was expelled from a Swiss school due to an affair with a maid.

He eventually became a revolutionary guerrilla leader at some point prior to 1911, and residing in Nuevo Paraíso. Reyes has goals of achieving social reform through a violent revolution, against the Mexican Army and their leader in the region General Ignacio Sanchez. His charisma has allowed Reyes to be an excellent recruiter for his band of guerillas.

Reyes is first encountered in the mission "Must a Savior Die?", where he has been captured by the Mexican Army and is set to be executed in El Presidio. John manages to rescue him and returns him to Luisa.

After John has been betrayed by the Mexican Army and is himself about to be executed in Chuparosa, Reyes snipes the executioner about to kill John, before cutting his ropes off and helping him find his weapons. Later, he helps to co-ordinate a robbery of a train belonging to the Mexican Army with John, with John receiving the contents of the safe on the train. His spies manage to track down the whereabouts of Javier Escuella to El Presidio, where Reyes and his rebels storm the fort, allowing John to locate with Escuella. After Javier is dealt with, the rebels march on Escalera to overthrow Allende.

During the battle, Reyes is captured and beaten by Raul Zubieta and his men, although he is freed when Zubieta is killed by Marston in a duel in revenge for killing Luisa. The rebels eventually fight their way to Allende's villa, but the Colonel flees to an armored stagecoach with Bill Williamson, where John and Reyes give chase. After the accompanying bodyguards are eliminated, the stagecoach comes to a standstill, with Williamson being forced by Allende at sword's point to exit. The player can decide to shoot either Williamson or Allende themselves (or both), where Reyes will shoot whichever one was not killed by John (or both if the player kills neither of the two).

Following the rebellion's takeover of Nuevo Paraíso, Reyes continues the revolution and marches on the capital in late 1911. He made promises of higher pay to the Mexican Army, and thus gaining the allegiance of a calvary unit and turns the tide of the battle. He eventually usurps Ignacio Sanchez and establishes himself as President of Mexico.

By 1914, Reyes has become a tyrannical dictator. According to newpapers, he is alleged to have ordered the execution a crowd of protesters numbering in the thousands outside the capital city. He is additionally reported to have delayed democratic elections and while denying accusations of allowing citizens to starve. Despite widespread scrutiny of having reneged on his promises to provide liberty to citizens of Mexico, he voices his belief that the country is at the point of "entering a new golden age", citing the recent construction of the new presidential palace as proof that the Mexican people can work effectively together. 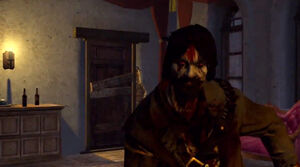 During the events of Undead Nightmare, Abraham Reyes finds an ancient Aztec mask underneath Escalera within a deep underground tomb. He puts it on thinking it would make him immortal, but it instead turns him undead and awakens the dead across the land. In the final mission, John kills the undead Reyes and puts the Mask back in its pedestal, thus ending the apocalypse. When John Marston returns home, he finds that both Abigail Marston and Jack Marston have turned back to normal. However, a few months later, Seth Briars is seen stealing the mask, recommencing the undead plague.

Reyes sees himself in a romantic light, as someone who acts as a liberator to the impoverished of Mexico. The peasants hold him in high regard, admiring how he doesn't believe in class divides and prejudice based on background. This is reinforced in John's conversation with Luisa, in which she happily tells him that Reyes promised to marry her after the revolution has ended. Underneath, however, Reyes is more cynically minded; he is disgusted by the mere suggestion of marrying Luisa, a peasant, seeing himself as above Mexico's lower class, despite claiming to be their liberator. This ends up making him similar to the other revolutionaries-turned-tyrants before him. Reyes shows little regard for these peasants, forgetting Luisa's name on occasions, even after she sacrificed her life for him.

Reyes seems to espouse the virtues of eugenics; a relatively new idea at the turn of the century which divides the "races" of humanity into upper and lower classes. He claims to possess more noble blood than the "peasants" he fights for and, when questioned of his less-than-favorable treatment of Chinese workers, he remarks that they are "an inferior race", to which John sarcastically remarks "You have the makings of a true leader, Abraham."

Officials in the Mexican Army, such as Vincente De Santa, think very little of Reyes, labeling him as a traitor and coward who never fights his own battles, but rather sacrifices his followers. While these accusations have a grain of truth, they are are greatly exaggerated. He avoids unnecessary combat, but also shows to hold no qualms particpating in it directly, such as personally rescuing John Marston from the Mexican Army before he can be executed. Additionally, he acts a decoy to aid the theft of a train and mans a cannon during the assault on El Presidio, and participates in the assault on Escalera alongside Marston.

However, despite Reyes' blatant hypocrisy and rampant promiscuity, he does seem to respect certain people such as John and Dutch, despite never meeting the latter. To some degree he respects the revolutionaries he leads and also the Mexican people he eventually ruled over, although he later became a tyrant. He admires Dutch's ideals and admits to John he would have liked to have met him. He also goes on to reward John for his services by helping him bring Bill Williamson and Javier Escuella to justice. 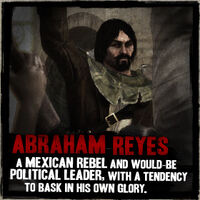 Reyes as a Redemption Multiplayer skin 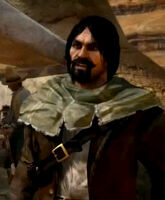 Reyes, leader of the rebels 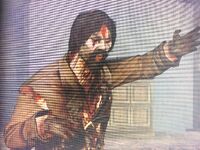