Bunter is a detective in the Pinkerton National Detective Agency.

Alongside his fellow Pinkerton agents, Orly and Johns, Bunter is sent to search Shady Belle - a recently deserted hideout of the Van der Linde gang - while one of its members, Arthur Morgan, is there to search for clues on the gang's subsequent whereabouts. Arthur may attack Bunter and the others if he wishes, or simply sneak past them. Regardless, Arthur is successful in finding the others. 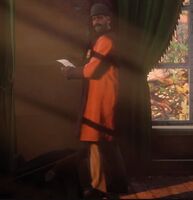