Kaitlyn Bausch
Agnes Dowd is a minor character and a point of interest featured in Red Dead Redemption 2.

According to the cries of her spectral form, Agnes fell in love with a man that her parents did not approve of, who had a previous relationship with another woman. After Agnes got pregnant from him, he tried to abandon her.[1] Although Agnes dissuaded her suitor from following his prior relationship, she was unable to convince her father that her partner was worthy of her. This ultimately resulted in the elder Dowd drawing a weapon and killing him, to Agnes' dismay.[1]

Although the course and conclusion of this confrontation are unknown, Agnes allegedly had a mental breakdown, murdered her father in revenge and took her own life after the death of her suitor.[1] A simple tombstone bearing her name, age and alleged crimes stands among others in the Shady Belle private graveyard.

Agnes can be seen as a ghost in Bluewater Marsh between 9 pm and 3 am, usually during foggy weather.

She can be encountered 16 times and will disappear if the player comes too close to her.

At each encounter, she will re-live the events of her lifestory which led to her death, which shall be in random order.[1]

In the last encounter, she will talk to the player and invite him to know the tree by which she hanged herself. 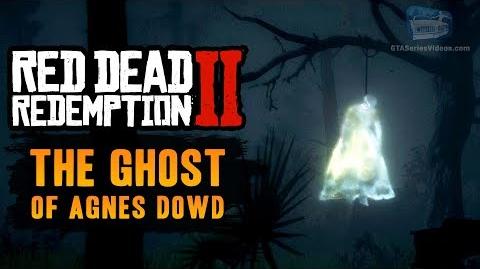