Albert Mason is a minor character featured in Red Dead Redemption 2. He is the subject of the stranger side-mission "Arcadia for Amateurs".

Albert is an amateur photographer who dreams of taking pictures of ferocious wildlife. He is shown to be somewhat clumsy, and is frequently told to be careful and aware of his surroundings.

Despite his clumsiness, Albert has shown to have skills in photography, gifting the player an action shot of wolves.

There are five interactions with Albert over the course of his expeditions, taking photos of various wildlife. He is spotted in several locations across the states, focusing on coyotes, wolves, horses, alligators, and eagles. 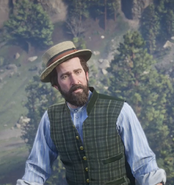 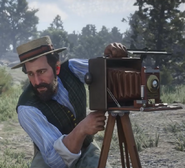