Alfredo Montez is a member of the Del Lobos gang and has brother named Jorge Montez. He is wanted in four states and two countries. In addition to this, he was found responsible for murdering a family near Thieves' Landing.

Marshal Tom Davies meets with the player's posse at Tall Trees and asks them help him capture Alfredo. Marshal Davies and player's to ride to Manzanita Post. Upon arriving at the trading post, Davies introduces them to Lee and instructs them to find Alfredo Montez. After searching the wilderness with Lee, and lengthy shootout with the Del Lobos at Swadbass Point. Later the player's posse and Lee head back to the post to deliver Montez's head, only to realize that it's his brother, Jorge Montez.

In the next encounter, Marshal Davies introduces Josie Dawson, a bartender at the Van Horn Trading Post to the player's posse. Davies states that Montez and his gang are out for revenge for the death of Jorge Montez, and have holed up in Josie's saloon. Josie overheard that more gang members will soon arrive in Van Horn from the gang's camp in the north, and states that it is possible that Alfredo Montez is in one of those two locations. The player will have to take out Montez's gang at the Van Horn Trading Post and at their camp.

After clearing out the gang in the two locations, Davies will announce Montez was just seen in a caravan down the road. The player's posse will follow Davies to ambush Montez and bring him to justice. After the caravan is taken out, player will capture Alfredo Montez. Afterwards, the player's posse will deliver Alfredo to Davies.

Later, the players will meet up with Davies in Valentine while the town is under lock-down in preparation for a raid from the Del Lobo gang. Davies is seen arguing with Sheriff Curtis Malloy in the Sheriff's office, Davies decides to execute Alfredo Montez in his cell without trial, deeming him too much trouble to keep alive. 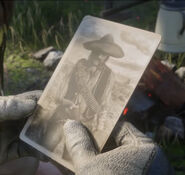 Retrieved from "https://reddead.fandom.com/wiki/Alfredo_Montez?oldid=375101"
Community content is available under CC-BY-SA unless otherwise noted.