“Who do you think you are, boyo? The bloody cavalry?”

Alwyn Lloyd, a.k.a. "Welsh," is a minor character featured in Red Dead Redemption.

Welsh is a small-time crook, and is characterised as unkempt, aggressive and witless. According to Irish, he met Welsh along with French on the boat to America, and were "thick as thieves", literally.

Welsh and his accomplice, French, are in the middle of torturing Irish by holding him face-down in a water trough. They accuse Irish of stealing their horses, and demand retribution. Irish claims he is innocent and that it was French who stole the horses, although this is never proven. The trio are interrupted by John Marston, sent by Nigel West Dickens to enquire with Irish about weaponry to assault Fort Mercer. Marston attempts to talk the pair out of killing Irish, but they turn hostile, forcing Marston to kill them in self-defence. 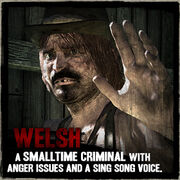 Add a photo to this gallery
Retrieved from "https://reddead.fandom.com/wiki/Alwyn_Lloyd?oldid=399298"
Community content is available under CC-BY-SA unless otherwise noted.