Folks have gone missing from Armadillo recently without explanation. Marston meets three unlucky souls who have each had family members go missing and each will ask for his assistance in investigating what could have happened to their loved ones. 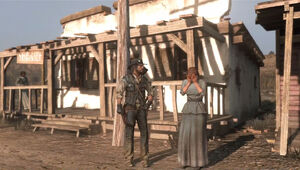 To complete the first mission segment, the player must:

As Marston passes through the town of Armadillo, he encounters a young woman in tears. Her name is Grace Anderson and she claims her son has gone missing in the hills near Hanging Rock. When Marston asks what the sheriff did about it, she continues crying and bemoans him as useless. A highlighted purple circle will appear on the map where she believes her son has gone missing.

When Marston approaches the highlighted area, all that is found is a puddle of blood, bones, and a shoe lying on the ground. These are the remains of Grace's son, Ralph Anderson, yet it is unclear of who or what killed him. 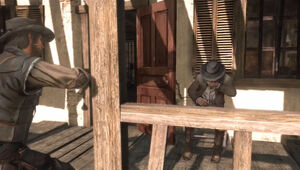 To complete the second mission segment, the player must:

northeast of The Hanging Rock.

After a while, go back to Armadillo and you will see a man on the porch of the sheriff's office with a similar story. He claims his wife, Beryl, went to pick mushrooms in the hills near The Hanging Rock. In short, Beryl has gone missing in the very same place Ralph Anderson went missing. Go to the highlighted spot on the map and you will find that Beryl has met the same fate as Ralph. 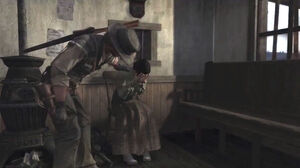 To complete the final mission segment, the player must:

Once again, go back to Armadillo after some time has elapsed and you will find another woman that has the very same problem, her husband has gone missing, and with a child on the way, she doesn't know what to do.

Go to the highlighted spot on the map and this time you will find Randall Forrester, who claims he was injured by some city man (probably the woman's husband). When approaching him, keep your weapon holstered. He tells you that the man couldn't have gone far. You decide to go after the culprit. Lasso the man once you catch up to him, hogtie him and bring him back to Randall.

As it turns out, the "assailant" was actually innocent and was about to become the next victim of a cannibal who is none other than Randall, apparently just like how Grace Anderson's boy and the man's wife have met their demise. You are now presented with three choices: let Randall finish his meal, kill/hogtie Randall and free the victim, or kill them both and walk away. 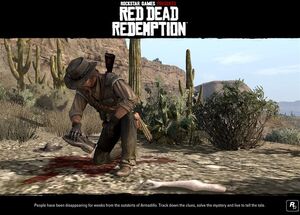 In an excerpt from the The Blackwater Ledger, the issue is mentioned.

Several residents of Armadillo and the surrounding area have gone missing over the past few months in separate incidents, but none have yet turned up, either alive or dead. Local law enforcement bodies are urging residents to show extra caution when travelling in the back country on their own, or when travelling at night. -Issue No. 53

Retrieved from "https://reddead.fandom.com/wiki/American_Appetites?oldid=308622"
Community content is available under CC-BY-SA unless otherwise noted.