The American Buffalo is an animal found in Red Dead Revolver and Red Dead Redemption.

The bison is a very large, herbivorous animal. Despite its name within Red Dead Redemption, what is known as the American buffalo is scientifically an American bison (Bison bison) - only distantly related to the buffalo. In fact, true buffaloes never entered North America. In the time Red Dead Redemption is set, the American bison was commonly known as a buffalo, and is still called a buffalo today, although bison is also used. Buffaloes are highly valuable when skinned.

In the mission Range War, the characters Holstein Hal and Longhorn Luke ("Buff") arrive on the scene riding bison. If Annie Stoakes kills one of them, she is able to ride their buffaloes for the remainder of the mission.

Buffaloes can be seen being hunted by a trio of hunters riding on horses while traveling to Cochinay during the mission "At Home With Dutch".

When the player first enters West Elizabeth, buffaloes roam the Great Plains in large herds. Like all animals, they can be hunted, but with one downside: they never respawn, so if the player kills all of the buffalo, the Plains will forever be bereft of their presence; doing this grants the player the Manifest Destiny trophy/achievement.

Buffaloes can be found in the Great Plains, most commonly to the west of Blackwater, out in the wide open land, as well as rarely east of Aurora Basin. The buffaloes are grouped in herds, consisting of many members. The herds are startled easily and disperse when any shots are fired, so using the Dead Eye targeting system and aiming for multiple headshots is recommended. The herd automatically regroups after an in-game day. Waiting prevents the player from having to search all over West Elizabeth and kill each buffalo one by one. The Buffalo Rifle, true to its name, is also effective against them, because it takes less shots to kill than with a normal rifle or repeater does.

Unlike other animals in the game, buffaloes do not respawn. Killing all twenty that spawn grants the player the Manifest Destiny trophy/achievement, but there will no longer be buffaloes in the Great Plains. Placing bait in the Great Plains area or replaying missions taking place there can cause buffaloes to spawn, but these will not count towards the achievement total. A repeating random NPC hunter event which spawns a buffalo hunter and buffalo can also add to their numbers, though only the original buffaloes will count towards the achievement.

The buffalo is the only animal in the game that does not appear as a wild animal in Redemption Multiplayer. It is available as a legendary mount, however, being unlocked after the player passes into Legend then returns to level 50. It is the second such multiplayer-only mount to be unlocked, following Bonzo. Like all legendary mounts in multiplayer, the buffalo is not susceptable to off-road traction loss and can travel at the same rate off-road as on road. 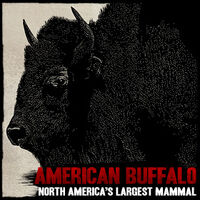 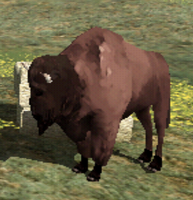 A stampeding herd of bison.

The player must kill an American Buffalo to successfully complete the following Trophies/Achievements: