“Well... the border is indeed closed. But the Army is sending a train down there. Now, whether it's to help the Mexicans there, or to escape their problems here, I have no idea.”

Nigel West Dickens has heard reports and rumors that the undead plague is not as pronounced in Mexico and suggests Marston go there to see if he can discover if those rumors are true and to see if he can find out how they're handling the plague, and maybe even discover the cause along the way.

Dickens has also heard rumor the American Army has a train(the No. 11 red line train) at Benedict Point that is bound for Mexico and it is just waiting for all the soldiers to gather. He tells Marston that if John could disguise himself as a soldier, he might be able to get aboard the train. Dickens also gives Marston the scoop on a set of Army deserters encamped at The Scratching Post that might lend him a uniform if he were to help them in some way.

"A Cure for Most of What Ails You"†; and
"Get Back in That Hole, Partner"

† = Note: It may take several game days after completing "A Cure for Most of What Ails You" before the icon for this mission appears on the world map.

"Birth of the Conservation Movement";
"Paternal Pride";
"Dinner for Two"; and
"Missing Souls"

After speaking with West Dickens, ride to The Scratching Post and help the deserting army soldiers fight off an undead horde. After which, they will allow the player to take the U.S. Army Uniform (alternatively, it may be stolen without helping the soldiers).

Don the uniform and ride to Benedict Point and help the soldiers there defend the train. When the train finally pulls out, the player will be tasked to defend it from pursuing undead. The player will be placed on a flatbed car and must survive until the train reaches Frontera Bridge.

The train will stop at the bridge due to debris blocking the tracks. The player will be ordered to help remove the obstruction and then subsequently fight off more undead before re-boarding the train. The Captain and the rest of the soldiers will flee, so the player is on his own here.

Once back aboard the train, release the brakes and ride it into Mexico. 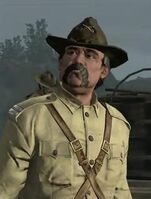 The Army Captain, as he appears in this mission. Note the Cavalry insignia on his hat, and the double-bars on his shoulder indicating Captain rank.
Add a photo to this gallery

Completing this mission contributes to the acquisition of the following achievement/trophy:

Retrieved from "https://reddead.fandom.com/wiki/American_Imperialism?oldid=353336"
Community content is available under CC-BY-SA unless otherwise noted.