$20,000
American Venom is the final mission of the epilogue and concludes the main storyline in Red Dead Redemption 2.

Sadie Adler hears that Micah Bell is alive somewhere. With the whereabouts of Cleet known in Strawberry the gang saddles up looking for revenge.

Sadie, Charles, and John ride from Beecher's Hope to Strawberry, where they find Cleet. The trio threatens to hang him if he doesn't reveal Micah's whereabouts and, in the end, Cleet reveals that Micah and his gang are at Mount Hagen. John can then choose to hang Cleet or, otherwise, Cleet will be shot dead by Sadie.

The three travel to Mount Hagen, but as they begin to ascend the mountain, Charles is shot in the shoulder by a sniper and wounded. Sadie and John take cover and fight their way up the mountain with Charles in tow. At some point during the journey up the mountain, a group of Micah's men ambush them, and Sadie is stabbed in the torso before getting saved when her attacker is shot by Charles. Afterwards, she tells John that she isn’t dying and merely needs to rest, prompting him to keep going. Almost immediately, John is confronted by Joe and two other members of Micah's Gang but, in a single moment, Joe and allies are gunned down by Marston, allowing the latter to continue on.

Marston finally reaches Micah, and engages him in a gunfight after a short conversation. While the two men are in a deadlock with neither able to gain the upper hand, Sadie manages to flank Micah from behind and holds him at gunpoint, forcing him to surrender. Before anything else can happen, Dutch appears all of a sudden, which causes Sadie to let her guard down from being so surprised. Seeing his chance, Micah subdues Sadie and holds her hostage, putting one gun to her head and aiming the other at John. Dutch also points one of his guns at John, resulting in a Mexican standoff between the three. John begs Dutch to help him, saying that he always did his best for him in the gang. Dutch eventually shoots Micah in the chest and holsters his guns. Shocked, Micah then tries to shoot John and Dutch, but John is quicker and shoots Micah multiple times, sealing his fate. Micah staggers for a few steps before collapsing dead in the snow, after which Dutch leaves, ignoring any attempt to thank him. John and Sadie then find a fortune of money and gold inside the cabin, with most of it presumably being from the Blackwater ferry robbery that took place eight years prior.

John, Sadie, and Charles ride back to the ranch, where they find Abigail and Jack. John tells her that it’s done, and the two finally get married. Charles and Sadie then depart, and are never seen again.

Cleet running away from John, Sadie and Charles

Before being interrogated by John

Cleet begging to be let go

Sadie seconds before shooting Cleet in the head

Micah drawing his revolvers at John

Dutch shoots Micah in the abdomen 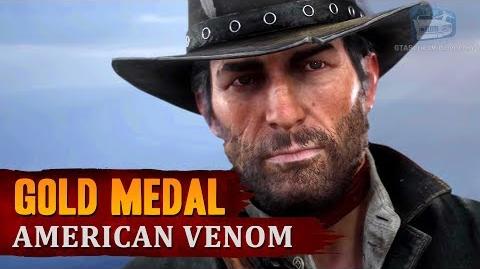 Completing this mission, chapter and storyline contributes toward the following Trophies/Achievements: