Americans at Rest is a mission in Red Dead Redemption 2.

Bill starts a brawl in Smithfield's Saloon in Valentine as Javier, Charles and Arthur attempt to charm the locals.

The player can find Javier at the bar speaking to a few women with Charles, after which Arthur promptly scares them away with rudeness. Arthur, Javier, and Charles wait for Bill at the bar, and they won’t have to wait long; Bill walks in, but he bumps into another patron on the way, starting a bar fight.

After fighting a bit, Tommy, the strongest local at the saloon, emerges from upstairs. He immediately attacks Javier, while another man jumps the player. After breaking free from him, Bill tells Arthur to save Javier from Tommy and fight will ensue outside between Arthur and Tommy.

At the end of the brawl, Thomas Downes, a bystander, begs Arthur to spare Tommy, which he does. Dutch and some others will meet up with the player, including Josiah Trelawny, an old friend who was looking for the gang in Blackwater. He says that some bounty hunters are holding Sean MacGuire, a member of the gang. Charles and Javier are sent to find more information, and Arthur is told to get cleaned up before joining the other two.

Anastasia and her friend talking to Arthur and co.

Charles, Javier, Anastasia and her friend in the saloon before the mission starts

Javier and Charles having fun with Anastasia and her friend inside the saloon.

The town of Valentine watching the fight between Arthur and Tommy 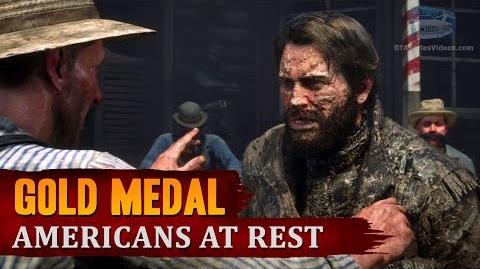