Amos Bell is the estranged brother of Micah Bell who, as of 1899, lives in San Francisco, California.[1] It is heavily implied that Amos and Micah once ran together as outlaws, possibly along with their father. However, they later had a falling out, and Amos was nearly killed by his father, Micah Bell Jr., on one occasion.[2]

Amos later moved to California with his wife and daughters. He also sent Micah a letter, in which he states that he will kill Micah if he comes within fifty miles of him. He also implies that he became a Christian, as he says that he "swore to the Lord Almighty" to protect his daughters from that is evil in the world and repent his sins. Regarding the relationship with his brother, Amos says that his antagonism is not because he "doesn't love" Micah, but that he is now a family man, which meant "washing [his] hands" of Micah.

Amos never appears in-game and is only mentioned in the letter he sends to Micah at Shady Belle, and occasionally by Micah in campfire stories. Micah openly states that he despises both Amos and his wife, while rebuking their choice to live by the sea and saying that only a man controlled by his wife would make such a decision. Micah describes Amos as a "spineless version of [him]", as well as a "fool" and a "coward". 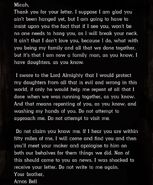