Amos Lancing is a major character and one of the main antagonists featured in Red Dead Online.

Amos Lancing is a wealthy and well-respected landowner who was a business associate of Philip LeClerk and Jeremiah Shaw and among the town of Blackwater's social elite. At some point before 1898, he married Grace Brown, who became friends with Philip's wife Jessica LeClerk.

In 1898, the Lancings and Shaw conspired to take over Philip's business and had Grace's outlaw brother, Teddy Brown, murder him in Blackwater. Not long after, Jessica came to suspect that they were behind the murder and had her assistant Horley release the protagonist, who was wrongfully accused of the murder, from prison so that they could help exact revenge.

When Teddy Brown is targeted by Jessica, the protagonist's posse, and the U.S. Marshals, Amos and Shaw try to pressure them into leaving Brown be. However, the protagonists ultimately subdue Brown, who admits to murdering Philip before Jessica executes him.

Shortly after Brown's death, Amos and Shaw try to finalize their takeover of Philip's business by presenting Jessica with a forged contract. They arrange a meeting in Blackwater, but Jessica and Horley, suspicious of their intentions, ask the protagonist's posse to accompany them. At the meet, Amos, accompanied by his bodyguards, greets Jessica while Shaw prepares the forged documents. Amos states that he misses Philip and feels bad about his death. He claims that he had nothing to do with her husband’s death and agrees with her that Teddy Brown deserved to die.

Amos then informs Jessica of a supposed agreement he made with her husband that in the event of one of them dying, the other would inherit the business in exchange for a nominal sum. Jessica accuses him of lying and Amos states that she signed the agreement last year. He reveals that the signed document is with Shaw and that she will only be able to inherit $500 dollars worth of her husband’s property. Jessica knows that her husband’s property is worth more than that amount and is furious at Amos. She then opens her purse to pull out her revolver and shoots Amos in the chest, who drops dead to the ground.

Amos Lancing is a two-faced man. He hides behind his wealth and reputation to get away with the murder of Philip LeClerk which he planned in order to gain control of his share of the business, despite already controlling a significant share; as such, he is a very greedy individual. He is also a liar, claiming that he was not involved in the murder in any way, and goes so far as to create forged documents that he further claimed Jessica had co-signed in order to achieve his goal. While he initially acts politely towards Jessica and states that he is sorry about her husband's death, he only does so in order to maintain his reputation, due to the meeting taking place in Blackwater, where he has the most influence.

Amos refers to himself as a "man of impeccable morality" and believes he is untouchable due to his reputation, only to be quickly proven the opposite when Jessica shoots him. He also shows little regard towards his associates, including Philip, whose death he was directly responsible for, and Teddy Brown, whom he calls a bad man and states that he is glad he was killed.

A photo of Amos Lancing. 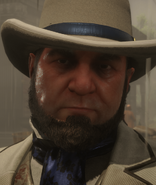