An American Pastoral Scene is a mission in Red Dead Redemption 2.

Following a tip-off, Micah and Arthur rob a banking stagecoach.

After they reach the destination, the pair ambush the coach and take out all of the guards and the driver, before hijacking it and driving it away. Arthur takes the reins, and Micah gives him a Lancaster Repeater to use, saying "that's more your style than mine".

Things seem to be going well, but once the duo get close to the Dakota River, O'Driscolls attack them and try to commandeer it for themselves, cutting down a tree to block the road. In the chaos, the carriage is blown up by a stick of dynamite, and the two are thrown into the river. Arthur and Micah manage to successfully eliminate their rival outlaws in the ensuing gunfight, with the few remaining O'Driscolls fleeing.

Missable Items in the MissionEdit 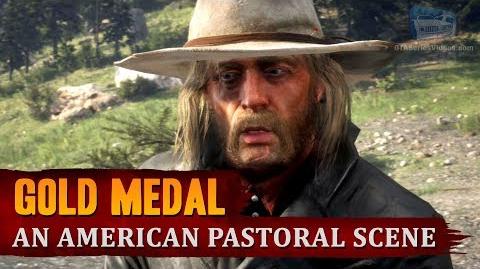 Background Music Played in the MissionEdit

Retrieved from "https://reddead.fandom.com/wiki/An_American_Pastoral_Scene?oldid=408080"
Community content is available under CC-BY-SA unless otherwise noted.