An Appointed Time is the forty-first mission in Red Dead Redemption.

The Mexican Army has executed many rebels in Escalera and has caught Abraham Reyes. John Marston arrives to see the citizens fighting the army, and eventually finds a tied-up Reyes, about to be executed.

Luisa Fortuna tries to save Reyes, only to get shot, and Marston avenges her by killing two of the soldiers watching over Reyes, who killed her. The remaining one, Raul Zubieta, challenges Marston to a duel. Marston wins and frees Reyes. After freeing many rebel prisoners, the rebels launch an all-out assault on Escalera.

After winning the duel, cut Reyes loose and head up to the prison. Three Federales will come running out of the door. After killing them, enter the jail and release the prisoners by shooting the locks.

Run back to Reyes to help him during the assault on the hill. There will be multiple enemies and you will be without cover at first. Make your way to the sandbags and take cover behind them. Once you've taken out all the soldiers, follow Reyes to the top and man the Gatling Gun.

The rebels will use explosives to open the door. Turn the gun to face the gates and shoot the TNT. Once the TNT explodes, keep shooting as there will be soldiers on the other side of the gates. After killing them all, move up and into the fort. There will be more soldiers once you get inside, so take cover behind one of the sandbags.

Reyes will tell you to protect the gates and to make sure none of the soldiers that are now coming up the hill enters the fort. You can man the Gatling Gun, but you might get killed as there's little protection while you're standing there. Take cover behind the sandbags either inside or outside the fort and kill the soldiers as they approach.

Once you've taken care of the incoming forces, move back into the fort and join up with Reyes. As Reyes' rebels breach through the door, Allende will be fleeing in a stagecoach with Bill Williamson. Head down the stairs behind the house and kill the three soldiers still left behind. Get on a horse and follow Williamson and Allende.

There are two guards on horses behind the cart, as well as the guard on the Gatling Gun. Take them all out before killing the guard riding shotgun, as he'll also be firing at you. Riding sideways will make it harder for the Gatling to kill you. Either shoot all the horses to make the cart stop or, even simpler, just kill the driver with a well aimed rifle head shot to make the wagon slow to a stop.

Alternate method: It is possible to kill all guards from the balcony as soon as you exit onto the veranda. The stagecoach will be riding away to your left. With your Rolling Block rifle, use dead-eye and snipe the guard riding shotgun, the driver, the Gatling Gun's guard and the two horsemen. The stagecoach will then stop and no chase will be necessary.

Once the stagecoach has stopped, Allende will try to buy his freedom by handing over Williamson. The player can then decide to either kill both of them, one of them, or neither of them, where whoever is not killed by John will instead be shot dead by Reyes.

Reyes invites Marston to accompany the rebels in marching on the capital to overthrow Sanchez, but John declines as he must return to Blackwater.

Marston and Reyes prepare to kill Allende and Williamson. 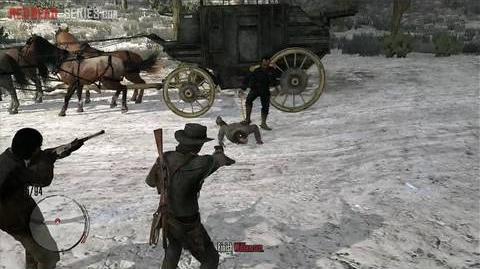 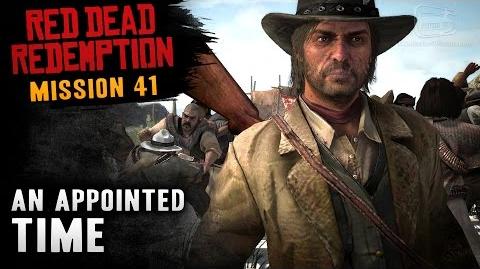