An Honest Day's Labors is a mission in Red Dead Redemption 2.

John meets Sadie in Blackwater. Sadie asks John to help her recover a bounty named Shane Finley who was taken from her by a professional rival, James Langton.

John meets Sadie in the Blackwater saloon, asking if she has any work. She tells John that, with him, she could attempt to take back the wanted Shane Finley after he was stolen from her by another professional bounty hunter, James Langton.

The two ride to New Austin to find Langton, and eventually spot him riding with some of his men towards Pike's Basin. The player can choose to either stealthily enter Pike's Basin, threaten Langton and his henchmen, or immediately start shooting. Whichever method is chosen, a shootout ensues and Langton is eventually slain. After clearing out Langton and his men, John puts Finley on the back of Sadie's horse, and they start riding for Blackwater. Soon afterwards, they are ambushed from above by Langton's remaining men, who are pursuing the pair on horseback. After, dispatching their pursuers, Sadie and John reach Blackwater to hand over Shane Finley.

Sadie reports to Police Chief Oswald Dunbar that Langton is dead after he tried to rob her, and is then paid $400 for the bounty, which she splits with John. 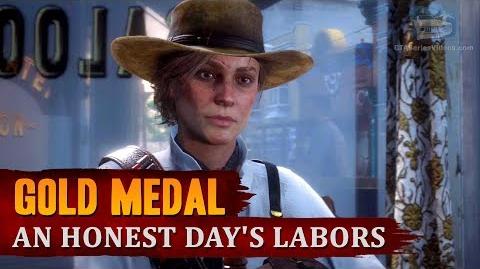 Retrieved from "https://reddead.fandom.com/wiki/An_Honest_Day%27s_Labors?oldid=415661"
Community content is available under CC-BY-SA unless otherwise noted.