Uncle receives a tip-off and rides off with Arthur, Charles and Bill to rob a wagon carrying payroll.

In camp, Molly O'Shea calls Arthur over to talk to him. However, they are quickly interrupted by Uncle, who received a tip-off about a Cornwall stagecoach which is allegedly unguarded. In order to rob it, he rides out with Arthur, Charles, and Bill. In spite of Uncle's expectations of it being relatively unguarded, a large number of Cornwall's guards in the vicinity descend upon the gang. Realising that they cannot win by fighting, the gang members flee on horseback into the woods, before hiding in an abandoned outhouse in an attempt to lose their pursuers.

At night, some of Cornwall's guards arrive on the property to search for the four gang members. An inhabitant of the house informs the guards that they heard something coming from the outhouse a few hours ago, and so the guards head towards it. Realising that they have been found, the gang is forced to fight, with huge numbers of guards attacking them from every direction. The barn eventually begins to burn down during the skirmish, resulting in the four escaping into the woods. They split up; Arthur goes with Uncle and Charles goes with Bill, and after eventually reuniting and finishing off the last of their pursuers, the four split the take and separately make their way back to camp. 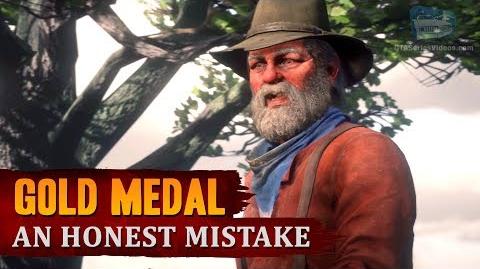 Retrieved from "https://reddead.fandom.com/wiki/An_Honest_Mistake?oldid=415887"
Community content is available under CC-BY-SA unless otherwise noted.