Red Dead Redemption mission
And The Truth Will Set You Free

And The Truth Will Set You Free/dialogues

And The Truth Will Set You Free is the forty-eighth mission in Red Dead Redemption.

After the armored car is blown up, John Marston has to reach Dutch Van Der Linde's fort in Cochinay by horseback following Ross and the American Army. After the long ride up into the mountains, Marston and his allies prepare for an attack on Dutch and his gang.

This mission begins automatically following the end of "And You Will Know The Truth".

After another brief cutscene mount your horse and prepare for another long ride with Ross and the US Army. Feel free to jump ahead of the army and ride to the destination. Upon arrival the army will blow open the gate and you'll proceed in on foot. Take out two or three waves of enemies then run into the village. Mount the gatling gun and take out the enemies in the village, or move to the small hill on the left side just before the gate where you can snipe all but three of the enemies in the village. The last three enemies will be on the left as you enter the gate formally. Be careful, as one member of Dutch's Gang can occasionally climb the watchtower behind the gatling gun and shoot the player. Keep an eye out as there are TNT crates placed in useful locations that will help you take out a large portion of the men in the village.

After you finish off the men in the village, proceed up to the checkpoint and you'll see a small cutscene with the officer. His men will take some time to plant the charges on the door and while they do you have to take out two waves of men that appear on the walls of the fort. After this you'll head into the heart of the camp alone to face Dutch and a few of his henchmen.

After defeating his two guards, take aim at the lantern behind Dutch's Maxim machine gun and shoot it to set the machine gun mount on fire. After Dutch abandons the machine gun, he'll run away and you'll be forced to chase him. Go up the ramp and to the left into the small room, climb the ladder and head across the walkway to the next building. Once inside go up the stairs and head into the tunnel to continue your chase. Climb a bunch of ladders until you've got Dutch cornered at the top of a large cliff. As Marston points a pistol at him, Dutch begins to speak, saying "We can't always fight nature John... We can't fight change. We can't fight nothin'." He also claims that (which are also his last words) "Our time is passed, John...", before falling to his death.

You will then start at the bottom of the cliff, looking over Dutch's body when Edgar Ross shows up. Ross is unimpressed that John didn’t shoot Dutch himself, and asks for John's gun. He then shoots Dutch’s corpse, stating that "It looks better on the report that way". He then tells John to go home to his family at Beecher’s Hope. "Compass" by Jamie Lidell (Red Dead on Arrival version)[1], one of the three songs in the game featuring vocals. However, if you shoot something, get off your horse, or pause the game, it will stop.

Main article: And The Truth Will Set You Free/dialogues

Where's my Family?!
Add a photo to this gallery 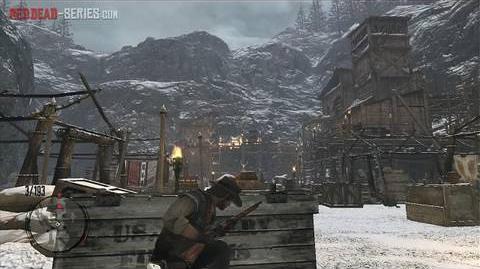 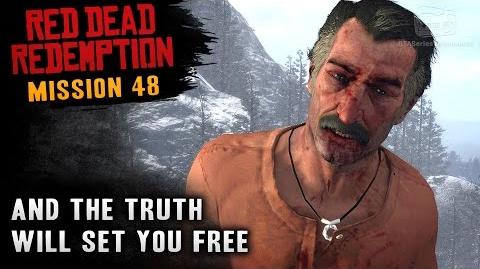 Retrieved from "https://reddead.fandom.com/wiki/And_The_Truth_Will_Set_You_Free?oldid=417751"
Community content is available under CC-BY-SA unless otherwise noted.