The Anderson Boys are a faction featured in Red Dead Redemption 2.

The Anderson Boys were founded sometime before 1899, by Anders Anderson. According to the newspapers, they soon instigated a reign of terror in Scarlett Meadows. One of the more notorious crimes they committed was the kidnapping of three wealthy individuals, whom they ransomed back for a sum two thousand dollars each. Two of those they ransomed back were horribly mutilated. Unfortunately for them, the Sheriff of Rhodes as well as his deputy eventually tracked them down shortly after the Van der Linde gang arrived at Clemens Point.

Hosea, Dutch, and Arthur encounter the gang being trucked back to Rhodes, sharing the prison wagon alongside Josiah Trelawny. Dutch, introducing himself under the alias "Hoagy Macintosh", begins speaking with Sheriff Gray in hopes of securing Trelawny's release. Their conversation indirectly allows Anders to lockpick the paddy wagon door, allowing him and his men to escape. The four quickly climb onto a passing train, though Arthur and Archibald pursue them on horseback. After one falls off the back car when he hits his head on an overhanging bar, Arthur leaps aboard the train and proceeds to incapacitate the rest one at a time. He at last comes face-to-face with Anders, who pulls out a knife and tries to attack Arthur, however, Arthur manages to knock him unconscious. Archibald manages to stop the train and tells Arthur on the ride back to Rhodes that the others will be rounded up. Anders is subsequently jailed at the sheriff's office. 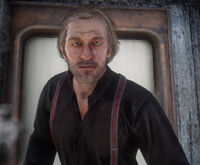 Anders Anderson, the leader of the gang. 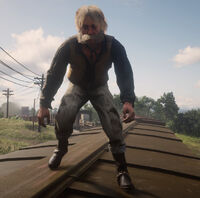 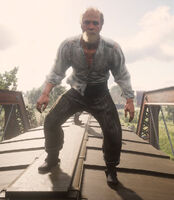 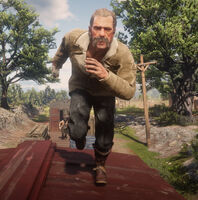