Andrew Milton is a major character and the secondary antagonist of Red Dead Redemption 2.

Milton is a high-ranked detective in the Pinkerton National Detective Agency. After Dutch robs his train, Leviticus Cornwall hires Milton and his subordinate, Agent Ross, to track down the Van der Linde gang and bring Dutch van der Linde to justice.

Pinkerton agents, Milton and Ross, approach Arthur Morgan when he is out fishing with Jack Marston at a river near Horseshoe Overlook. Milton offers Arthur a chance to surrender and turn Dutch in, in exchange for amnesty. When Arthur refuses, Milton reveals that they captured Mac Callander after the Blackwater ferry robbery and killed him slowly, enraging Arthur. He then proceeds to leave with Ross.

Milton and Ross approach Dutch and his gang at their camp in Clemens Point. Milton offers Dutch a chance to surrender in exchange for the other gang members to leave and be granted amnesty. Dutch originally pretends to comply, but the gang all draw their weapons. Flustered, Milton warns Dutch that he will be back with fifty men and that the gang should leave quickly.

During the bank robbery in Saint Denis, Milton captures Hosea Matthews while he orchestrates a distraction and holds him hostage outside the Lemoyne National Bank, which the Pinkertons have surrounded. Milton states that any reservations for making deals have been exhausted, and subsequently shoots Hosea in the chest, killing him. A gunfight ensues, but the Van der Linde gang eventually manages to escape.

Milton and his agents pick up Micah Bell after he, Dutch, Arthur, Bill, and Javier come back from Guarma, and Micah becomes an informant for the agency. Later, almost certainly thanks to Micah’s information, a large group of Pinkertons led by Milton attack the gang's hideout in Lakay, ordering the house that the gang is holed up in to be riddled by a Maxim Gun. Despite Milton's best efforts, the gang manages to repel the attack.

Along with Ross, Milton meets with Leviticus Cornwall in Annesburg. Cornwall scolds him for his lack of progress and threatens to pull his funding. Milton insists that the Pinkertons are "very close" but Cornwall is dismissive; Milton then leaves with Ross, shortly before Dutch confronts Cornwall.

While the Van der Linde gang are robbing a train, Milton captures Abigail and holds her hostage at the Van Horn Trading Post, prompting Arthur and Sadie Adler to rescue her. However, Sadie gets captured by Milton, and Arthur is forced to confront Milton himself. Milton sneaks up behind Arthur and holds him at gunpoint. He reveals that Micah had betrayed the gang, feeding the Pinkertons with information ever since the gang came back from Guarma. Arthur grabs Milton's gun, but is unable to overpower him due to his Tuberculosis. Fortunately, Abigail manages to break free of her confinements and shoots Milton in the temple using Sadie’s revolver, killing him instantly and saving Arthur. Despite Milton’s death, the Pinkertons, now led by Edgar Ross, continue their hunt for the remainder of the Van der Linde gang.

Milton is shown to be a strong believer in the inevitable and desirable progress of civilization. His philosophy is best summed up by one of the first things he says to Arthur: "I enjoy society, flaws and all". He despises Dutch van der Linde, believing him to be a "savage" and a parasite that preys on the civilized and weak. He is ruthlessly determined to see Dutch suffer for his crimes, to the point where he is willing to allow some degree of clemency for gang members if they turn him in.

Despite his stature in a government backed organization, it can be said that Milton is just as ruthless as the gangs he hunts. He outright executes Hosea Matthews after he surrendered and was captured, and opened fire with a Maxim gun on a wooden hut housing a child and numerous women. He was even thinking about giving them a chance to surrender before shrugging and deciding to slaughter them regardless. In short he is sadistic, obsessive, irascible, self-righteous, and ambitious. It could be speculated as well that his fellow Pinkerton agents dislike him (and vice-versa), as in the mission “Dear Uncle Tacitus”, an agent quips contemplatively that he'd "like to find a poisonous snake for him." He's also extremely smug up until his death and mockingly cordial with his enemies, in a weak attempt to seem professional. Just about Milton's only redeeming trait is that he's confined to the law, a standard Cornwall doesn't hold in comparison.

Milton is explicitly racist, a given for the setting. He's proud of the government's genocide of the Native Americans and calls Lenny "boy", as well as being disgusted just by his touch.

Milton is clean-shaven, revealing a face full of scars and other deformities, likely from his violent line of work within the Pinkertons. His cheeks are also deeply pockmarked, suggesting that at one point he contracted smallpox or a similar disease. He has a slim build and a "high and tight" haircut, with the sides of his head completely shaved and the top left intact (a very unusual hair cut for a western man at the time). He's never seen outside his Pinkerton uniform; a black business suit and bowler hat, but with distinct red trimmings to help him stand out as a senior ranking agent.

Agent Milton in a trailer 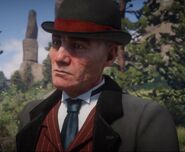 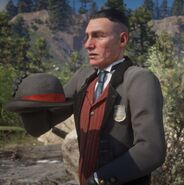 Agent Milton without his hat 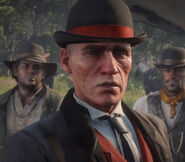 Retrieved from "https://reddead.fandom.com/wiki/Andrew_Milton?oldid=380527"
Community content is available under CC-BY-SA unless otherwise noted.