Angelo Bronte is a major character and a supporting antagonist featured in Red Dead Redemption 2. He serves as the main antagonist of the game's fourth chapter.

Born in the mid-1840s, Angelo Bronte is a wealthy Italian businessman and crimelord, mainly operating in the city of Saint Denis. He has been a long time supporter of law enforcement and frequently attends social events with Saint Denis politicians.[1] He also seems to be a major donor of the mayor Henri Lemieux [2] and have many connections to highly ranked state officials, as seen at the mayor's party. His criminal business consists of bribery and defrauding officials to raise their financing; Bronte has financial connections to many businesses in the city, as a document in his residence shows.

Bronte has been accused by some for being involved in a crime syndicate that deals in smuggling and racketeering. He may be responsible for the death of a Saint Denis policeman Henry Jenkins, who was investigating Bronte's alleged criminal activities.[3]

Angelo Bronte is first mentioned by Catherine Braithwaite, who revealed under duress that her sons had sold Jack Marston to Bronte after abducting him.

Dutch, Arthur and Jack's father, John, eventually travel to Bronte's mansion in the city of Saint Denis. Once inside, Dutch asks Bronte why he kidnapped Jack, resulting in a short argument between the two. Bronte, however, abruptly stops arguing and exclaims his apparent fondness for how Dutch talks to make the three appear innocent, and Dutch introduces the other two to Bronte. The three ask if Jack can be returned, but Bronte proposes a deal instead: he promises to return Jack to them in exchange for Arthur and John eliminating a group of grave robbers at the nearby cemetery. The pair do so, and when they return, it is evident that Bronte kept his promise as Dutch is found outside the house with Jack at his side.

As they return to the camp, Jack informs the group on how kind Bronte was to him, even referring to him as "Papa Bronte". He talks of how he had his own room with a big box of toys, had baths every night, ate spaghetti and learned the Italian words for "horse" and "slipper".

Shortly after, Bronte also invites Dutch to a party at Mayor Henri Lemieux's residence. Van der Linde accepts, bringing Arthur, Bill, and Hosea with him. Bronte identifies many of the party's guests and offers his opinion on them in conversation with the four, while dismaying Dutch by making various snide and condescending comments about him. Before the gang members part company with him, Bronte tells them about a trolley station in the city and gives the gang his blessing to rob it.

Per Bronte's recommendation, Van der Linde decides to rob the aforementioned trolley station, taking Arthur and Lenny with him. However, the tip is revealed to have been a set-up, as the money stash turns out to be extremely minimal and numerous police descend on the scene, with Police Chief Lambert having been alerted by Bronte. The trio of outlaws narrowly manage to escape, after which Dutch vows revenge on Bronte for betraying him.

In spite of some opposition from Hosea, Dutch subsequently proceeds with his plan to kill Angelo Bronte. Dutch, Arthur, Bill, John, Lenny, with help from Thomas, ambush Bronte's residence at night, causing a skirmish with the Italian's henchmen. Bronte, who was hiding throughout, is eventually found inside the house by Arthur and John; the crimelord attempts to shoot them, but his pistol jams and he throws it at John before frantically attempting to negotiate. Instead, Bronte is knocked out by a punch from John and carried downstairs by Arthur, then into a boat in the swamp. When he regains consciousness, he insults Dutch, who soon flies into a rage and repeatedly submerges his head underwater, drowning him. Shortly thereafter, he tosses Bronte's body overboard to be consumed by an alligator, shocking the other gang members.

After his death, Bronte's crime syndicate is taken over by Guido Martelli, who was previously his right-hand man and underboss.[4]

Under the mask of a respectable businessman, Angelo Bronte is a devious and ruthless crimelord who controls the city of Saint Denis from the shadows. He also can be very deceptive, capable of displaying a false friendliness toward people and secretly betraying them later.

Similar to his business associate, Catherine Braithwaite, Bronte has a strong sense of superiority, considering Saint Denis to be "his city", and looks down on people without political power or wealth.

Angelo Bronte is a middle-age man with black hair. He typically wears a flower-pattern headband, white shirt, and crimson coat.

Bronte with his Mauser Pistol

Bronte shortly before being knocked out by John

Arthur and Bill putting Bronte into their boat

Bronte after waking up 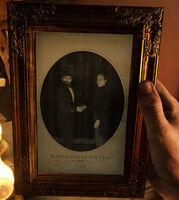 A 1898 photo of Bronte receiving a award