Angus Elliston is a stranger featured in Red Dead Online.

Angus Elliston is a train station clerk. At some point before 1898, he became associated with Alden Carruthers and, just like him, resorted to offering robbery tips to outlaws in exchange for payments.

Angus can be found at either the Emerald, Victoria Street, or Wallace Stations, and will offer recovery, delivery, escort, and hunting missions to the player. Accepting his missions increases the player's honor.

Unlike the rest of the "discouraged" group of Postal clerks, Angus mentions that he is a reluctant member. He often reminisces about his father telling him that working for the postal service was an honest job, however, he was eventually forced to relent to crooked means due to low pay. As such, he frequently expresses dislike towards Alden for having to do so. 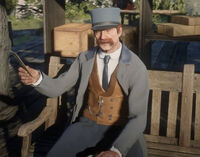