With the addition of the Legends and Killers DLC pack, Annie Stoakes is a multiplayer character model in Red Dead Redemption.

Annie works as a cattle rancher near Bear Mountain and wields a repeating rifle which she has affectionately named "Faith." Annie's father did not adhere to the gender roles of the day: He raised his daughter to be a successful, independent rancher in a violent, male dominated society. Annie was getting by with relative ease until Governor Griffon became obsessed with owning her ranch for himself. When she refused all his offers, Griffon used bribery and intimidation to scare off Annie's ranch hands, but this only succeeded in making Annie work that much harder.

Annie is in the bank in Brimstone, having a heated argument regarding her debts and Governor Griffon's actions when Red Harlow walks in to claim his bounty money. After Annie storms out to return to her ranch, Red decides to follow her.

Back at the ranch, Annie finds a note indicating that her ranch hands have deserted her, being bribed or coerced away by Griffon. Two of Griffon's thugs are at work setting fire to her house and barn, the start of an all-out range war that Annie must fight single-handed.

Although she was able to kill off all of Griffon's thugs, her barn and house were destroyed by the fire that raged for two days. Her cattle ran off and she was left with nothing. After the battle, Red shows up and questions Annie about Bear Mountain's gold and Governor Griffon. He then hands her a flyer for the Battle Royale, which promises a prize of $5000 in gold, enough to pay off her debts.

When Red returns to Brimstone later on, he finds Annie there, already signed up for the competition. During the dueling competition, Annie defeated two unnamed opponents, and was slated to face Jack Swift in the semi-finals. However, Governor Griffon, growing impatient and wanting to see Red Harlow dead, disqualified both Annie and Jack so only Red and Mr. Kelley would be left.

After Red killed Kelley, he, Jack and Annie headed off to storm Griffon's massive, fortified mansion. After Red killed Griffon, he gave Annie the $5000 in gold from the Battle Royale so she could keep her ranch.

Annie Stoakes appears to be a folk legend in the Redemption universe. The story of her defending her ranch against bandits is often talked about in campfire stories[1]. Due to being a female rancher, folks often compare her to Bonnie MacFarlane.[2]

Annie is available as a multiplayer character in Showdown Mode from the start of the game and does not need to be unlocked.

Annie Stoakes is one of eight characters from Red Dead Revolver added to Red Dead Redemption as playable multiplayer character models by the Legends and Killers DLC. 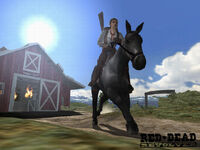 Side-by-side comparison of Revolver and Redemption versions of the character. 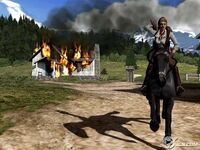 Annie and her house 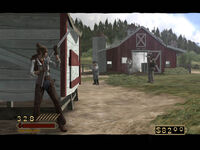 Annie during the mission 'Range War'.

Retrieved from "https://reddead.fandom.com/wiki/Annie_Stoakes?oldid=416030"
Community content is available under CC-BY-SA unless otherwise noted.