Ansel Atherton is a banker at the West Elizabeth Co-Operative Bank. He is also a distant cousin of David Geddes.

John Marston approaches David Geddes and asks him if he will put in a good word for him at the bank so that he can buy some land at Beecher's Hope. Geddes agrees to help and tells him to talk to Ansel since he is a distant cousin.

John arrives at the bank and asks the clerk where he can find Atherton. The clerk tells him he's in his office, and John tells Atherton that he wants a loan to buy Beecher's Hope. He will go on to say that his name is John Marston, although he goes by Jim Milton, isn't much of a farmer, and is friends with Geddes. This is met with derision from Atherton, although he, at last, decides that he will allow John to get the loan due to his affiliation with his cousin. Atherton then tells John to inspect the property and clear out any illegal tenants, while he writes up the paperwork.

After dealing with some squatters, John returns to the bank. Atherton tells John to sign two papers, and that if he can't pay off the loan in a certain amount of time then the ranch will default to the bank. He also tells him that he has a line of credit set up for John which he can use for improvement on the ranch, although it will be added to his debt.

Atherton is seen for a final time when John goes back with Uncle to ask for extra credit in order to buy a barn for the ranch. Atherton refuses, however, due to John's financial instability and Uncle's rudeness.

Atherton is shown to be loyal to his family and trusts their judgement. He also is shown to want to help other people, but will not do this if it poses a risk to him. Atherton has a fondness for jokes and humorous comments. 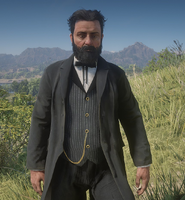