At some point before 1899, Anthony Foreman formed and became the leader of the Foreman Brothers gang, which a young Tilly Jackson was a member of. However, she eventually killed Anthony's cousin, Malcolm, for supposedly necessary reasons and subsequently left the gang. Since then, Anthony swore revenge on her, seeing her departure from the gang as abandoning what he considered her family.

The protagonist can encounter Anthony at Radley's House, where he will initially hold them at gunpoint when they enter. However, he will relax upon realizing that they are in search of work and offers to pay them if they manage to kidnap Jackson James, a man he claims has been speaking ill of him.

Afterward, Anthony can be found at either Radley's House or Doyle's Tavern, and will offer coach holdup, supplies destruction, wagon/horse theft, and paid killing missions to the player. Accepting his missions will cause the player to lose honor.

Anthony appears in the Blood Money update as a member of Guido Martelli's criminal network, and offers new missions to the protagonist.

Anthony is first seen harassing Tilly while Arthur is searching for her in Valentine. When Arthur intervenes, he decides to back down and leaves.

While the Van der Linde gang is staying at Shady Belle, Anthony and his gang later track down and kidnap Tilly, holding her at Radley's House. When Arthur and Susan Grimshaw arrive at the place to rescue Tilly, Grimshaw gains them entry by killing the lone Foreman gang member outside with a knife. Arthur enters the house and dispatches two gang members guarding Tilly, who states that Anthony believes he owns her and went out to hunt with his gang. Foreman and two gang members flee when Arthur and Susan exit the back door and catch sight of them, at which point Tilly requests that they capture him.

Arthur and Susan pursue Anthony and his gang, gunning down two of his men in the process. They eventually catch up to Foreman, who is promptly hogtied by Arthur and brought back to Tilly. Once Arthur brings Anthony to Radley's House, he cuts the rope binding his legs and holds a knife to his throat before Tilly begins arguing with Foreman. She tells him that his cousin deserved to die and that he should leave her alone; in response, Foreman promises that he will leave her alone and Tilly walks away. Susan tells Arthur that he can choose to kill Foreman or spare him, adding that she’d like him to be killed while Tilly would prefer otherwise.

If the player chooses to kill Foreman: Arthur says that he doesn’t want to take any chances and proceeds to impale Foreman in the torso with a knife, killing him.

If the player chooses to spare Foreman: Arthur unties Foreman's hands and tells him to go; the two men never encounter each other again.

If spared, Anthony continues to be a criminal and, by 1907, the Saint Denis Police Department places a bounty of $85 on his head. John Marston can accept to capture Foreman alive for the bounty, and goes to Doyle's Tavern, which he frequents. Once John finds Anthony, he flees, only to be apprehended by Marston and subsequently brought to the Saint Denis jail. After Foreman's imprisonment, John can converse with him. 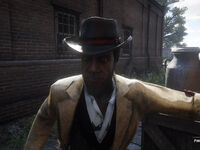