Very Low
The Antler Knife is a weapon featured in Red Dead Redemption 2. It cannot be customized.

A rare knife, with a handle manufactured from the antler of a stag, and part of the blade snapped off near the crossguard.[1]

This knife can be looted from a dead hunter and large bear, northwest of Hanging Dog Ranch, slightly above Little Creek River in West Elizabeth. 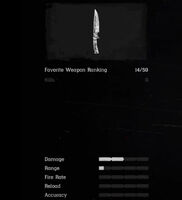 Antler Knife's location on the map

The result of the fight between the hunter and the bear