Red Dead Wiki
Register
Don't have an account?
Sign In
Advertisement
in: Mounts in Redemption 2, Mounts in Online
English

The Appaloosa is a horse breed in Red Dead Redemption 2. Half of the coat types will need to be tamed from the wild. Appaloosas tend to have higher stamina, average health, and speed, but lower acceleration. Its handling gives it moderate reactivity and agility.

Appaloosas are classed as work horses. They can be identified by their compact frame and spotted or speckled coat. The Blanket, Leopard Blanket, and Few Spotted are found in the wild (with the latter having a lower spawn rate), while Leopard and Brown Leopard coats are purchasable in stables. Their willing and manageable temperament leads to easy handling. Additionally, this breed of horse is healthy, with a reasonable amount of Speed and great Stamina; perfect for ranch work.

The Appaloosa is a hardy and willing horse with great endurance. They have strong legs, a short thin mane, and hard striped feet. The bloodline runs back many centuries with the characteristic coat pattern seen among cave drawings. Suitable for many kinds of equestrian activity, they are at home on any farm, and are the preferred breed among many workers.

The horse of Charles Smith throughout 1899. Charles lends this horse to Arthur Morgan during the mission "Outlaws from the West", due to the absence of the latter's usual horse, meaning that this is the first horse ridden by the player in the game. Taima has a "Grey Snowcapped Spotted" coat and can be found within the gang's camp; it is one of the few horses to not get skittish when approached. "Taima" is a word of Meskwaki origin, which can be translated as "sudden crash of thunder", or simply "thunder."

The horse of Josiah Trelawny throughout 1899. Gwydion has a "Brown Leopard" coat and can usually be seen at the gang's camp. Additionally, Gwydion's coat can be found at the stable in Tumbleweed during the epilogue, for the player to purchase. "Gwydion" is the name of a trickster deity of Welsh mythology, which is fitting given Trelawny's history as a swindler and con man.

The horse of Uncle throughout 1907. Nell IV has a "Few Spot Buckskin" coat and can be found at Beecher's Hope. Though she seems to be a draft horse like a Suffolk Punch, she is referred to as an Appaloosa in-game.[1] She appears to have a very distinct mustache on her face; while this is common among draft horses, it is exclusive to Nell IV. In the mission "Home Improvement for Beginners", Nell IV is used alongside Charles Smith's horse, Falmouth, to pull down the shack which previously stood on the land at Beecher's Hope.

In Red Dead Online, the horse Lee commandeers in the mission "Where Your Morals Lead You" is a unique Appaloosa that has a "Black Snowflake" coat. In the game files, the horse has 4 points in speed and acceleration. 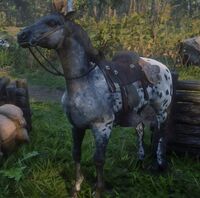 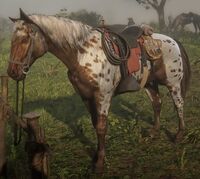 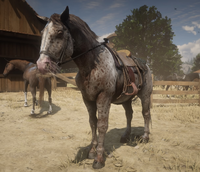