Arthur visits Rains Fall in Wapiti and they travel to a sacred Native American site in the Grizzlies East.

After agreeing with Charles Smith to help Rains Fall, Arthur travels to the Wapiti Indian Reservation to see him. Once there, he is invited into Rains Fall's tent. At first, Rains Fall laments the fact that Arthur went on a raid with Eagle Flies, calling the latter "the impetuous prince". Arthur apologises and begins coughing soon afterwards, which Rains Fall quickly picks up on, and asks Arthur if he is sufficiently well. Afterwards, Rains Fall asks Arthur to accompany him to a site that is sacred to the tribe, which Arthur accepts.

The pair mount their horses and set out for their destination. Soon after departing the reservation, Captain Monroe intercepts them and informs Rains Fall that the meeting he went to in order to help secure the tribe's homeland went badly. Rains Fall thanks him for his help nonetheless, and Monroe asks Arthur if he could help with something at some point soon; the player can either agree to help him or refuse. After Captain Monroe leaves, Arthur and Rains Fall continue riding. On the way, they can talk about various things - Arthur can discuss Eagle Flies, or even his own son, who died some time ago. Additionally, the conversation can move on to Arthur discussing his sickness and how he is terminally ill, or about Dutch van der Linde, who Rains Fall is keen to know about. Along the way, Rains Fall also collects a number of herbs, which are designed to make Arthur's cough less severe.

The two eventually arrive at the site, where Rains Fall is horrified to discover that it has been destroyed in an arson attack and the Chanupa, a very sacred artefact for the Wapiti Indians, has been stolen. They begin looking for clues as to who had committed the act, and find a number of discarded whiskey bottles on the ground. Rains Fall then says that it was likely to have been US Army soldiers, and proceeds to survey the area around him with Arthur, using binoculars. Arthur spots an Army camp at the bottom of the valley and decides they must have been responsible for the attack and the theft of the Chanupa. Arthur offers to infiltrate the camp and steal it back from the soldiers. Rains Fall is initially hesitant but allows Arthur to do so, but tells him not to harm any of the soldiers.

Arthur then makes his way into the camp to steal back the Chanupa. Undetected or otherwise, he finds it on the floor and assembles it, before returning it to Rains Fall. When he does, Rains Fall asks if anyone was hurt; if so, he bemoans that the Army will surely seek revenge for the attack. If it was done without killing any guards, Rains Fall thanks Arthur and gives him a sacred Owl Feather Trinket as a gift. 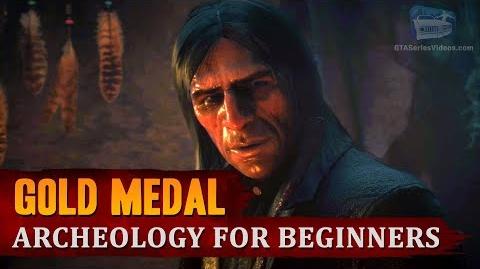 Retrieved from "https://reddead.fandom.com/wiki/Archeology_for_Beginners?oldid=408088"
Community content is available under CC-BY-SA unless otherwise noted.