Fordham joined the Bureau of Investigation at some point in or prior to 1907. Still a junior agent by 1911, he is the protegé of senior agent and director Edgar Ross.

In 1907, Fordham and Ross find Micah Bell's corpse on the top of Mount Hagen, and travel to various locations whilst interviewing citizens, in an attempt to find the killer. They eventually find the ranch at Beecher's Hope, where they spy John Marston teaching his son Jack how to brush a horse. Convinced that they found the killer, Fordham and Ross nod to each other and leave to plan their next move.

In 1911, prior to the events of Red Dead Redemption, Fordham and Ross take John Marston's family away from him in order to strong-arm him into hunting down some of his former comrades from the Van der Linde gang. Following the abduction of Abigail and Jack Marston, the two agents are seen escorting John Marston to the train station in Blackwater, during the opening credits of Red Dead Redemption.

Fordham is not seen again until much later in the game. After the player captures or kills Javier Escuella in the mission "The Gates of El Presidio", they are required to meet Fordham and Ross at a bridge crossing between New Austin and Nuevo Paraíso. Depending on whether Escuella is alive or dead, Fordham will commend John for a job well done, or criticize him for killing Escuella. Either way, Fordham reminds Marston of his obligations and tells him to return to Blackwater as soon as he deals with Bill Williamson, before he and Ross drive off with Escuella.

Once John arrives in Blackwater, Fordham and Ross directly work with him to track down his former gang leader and mentor, Dutch van der Linde, who has formed a new gang of disaffected Native Americans. After rescuing their informant, Nastas, from the Wreck of the Serendipity and attempting to prevent Dutch and his gang from robbing the Blackwater bank, Fordham participates alongside John and Ross in a climatic assault on Van der Linde's camp with the assistance of the U.S. Army. During the assault, Marston corners Dutch, who chooses to commit suicide by throwing himself from a cliff, declaring to John that their time is up, a reference to the federal government's manipulation and the pursuit of outlaws like them. Following Dutch's death, Fordham and Ross meet with John one last time at the bottom of the cliff, where the former thanks John for his assistance and tells him that he's made his country proud. The agents then part ways with Marston, informing him that he is free to return to his ranch, where his family is waiting for him.

Fordham is not present in the final mission of the game, "The Last Enemy That Shall Be Destroyed", where Ross betrays John and launches an all-out assault on his ranch to kill him. It is unknown whether Fordham simply had other matters to attend to at the time, or refused to participate out of respect for Marston, who had been nothing but useful to him and Ross.

Archer is characterized as being assertive and exceedingly capable at his profession, yet more hot-headed and impulsive than his cold and calculating mentor.

Fordham unwaveringly supports Ross in his dishonorable methods. However, unlike Ross, Fordham appears to develop a respect of sorts for Marston during the last few missions he is in, and thanking him for his help after Dutch's death. Interestingly, Fordham does not participate in the killing of John Marston, despite his heavy involvement with his case, though whether this was due to any personal respect for Marston remains unexplained.

Participating in a handful of violent engagements with Dutch van der Linde, Fordham demonstrates himself as exceedingly capable in combat.

As of 1907, Fordham is a young man with a clean-shaven face. He is seen dressed in a formal business suit with a black tie and a black bowler hat with gray trimmings.

By 1911, Archer is slightly leaner and appears much taller than Ross. He sports an immodest, lighter three-piece suit with a black tie. In addition, he wears a different bowler hat with darker black trimmings. 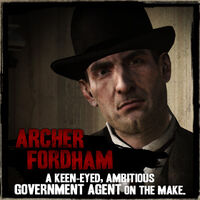