You may also be looking for Armadillo, the animal found in Red Dead Redemption.

Armadillo is depicted as one of the few remaining boomtowns of the American West, in contrast to the modern industrialized northern settlements characterized by the city of Blackwater. Armadillo is a common hangout for Walton's Gang members, who continue to bring violence and chaos to the town. Duels are common, making it a place where danger is ubiquitous.

By 1911, Leigh Johnson is the acting Marshal and legal authority of Armadillo, along with local lawmen, and is well known by the local residents. He is assisted by the young deputies Jonah and Eli. According to Johnson, the arrival of railroads to Armadillo led to the decline of its regional rival, the old decaying frontier town of Tumbleweed, reducing the latter to being an abandoned ghost town at the time of Red Dead Redemption.

Herbert Moon, the general store shopkeeper, refers to himself as Armadillo's first citizen. It's unknown if he means the most important citizen, or was literally one of the founders of Armadillo, which is certainly possible given his age.

The history of Armadillo during the late 19th and 20th centuries is plagued with disease outbreaks, with many of them causing near-wipeouts of the town's population. In 1897, Leigh Johnson was appointed district marshal of the town.

In 1899, Armadillo experienced an outbreak of Scarlet Fever, which caused much of the town to flee, with the remainder becoming heavily ill, with many fatalities. It is unknown when this plague ended, but it was sometime between 1899 and 1907.[1]

After the Scarlet fever outbreak, the town would be plagued again by the desert plague, and then a typhus outbreak would occur afterwards. When exactly these outbreaks occurred is unknown, but it would have been between 1899 and 1907.

In 1907, Armadillo and the nearby area seems to be suffering from a cholera plague and most of its inhabitants are either dead or have moved away. Furthermore, multiple fires can be seen throughout the village, mummified bodies can be found from time to another and a handful of Del Lobo thugs make their way to town, occasionally.

During the cholera outbreak, the saloon in Armadillo is active, although it only serves drinks. Additionally, Herbert Moon is still in the town, and the player can visit his general store. There is also a town crier, with pamphlets warning people about the cholera, with many of the townsfolk seen to be either dead or gravely ill. Temperatures in Armadillo are high; it will often reach the mid-thirties (Celsius) during the day.

By 1911 the town recovered from its series of plague and life in the town had returned to normal once again. Armadillo is the heart of New Austin. Despite the general decay of the region, it provides good services and goods to this day. Recently, Walton's Gang have been terrorizing the townsfolk of Armadillo and have infested the saloon. Three or four members of Walton's Gang occasionally ride through town, dragging a civilian behind them, and firing their guns. It is also common for Herbert Moon's General Store to be robbed, or for a random prostitute to be attacked by an angry punter (and killed if nothing is done). The only type of shop that the area does not possess is a tailor, but because interaction with tailors is not particularly common (only to buy outfit scraps or a bandana), this is not a problem.

A small portion of "Exodus in America" takes place in the saloon. Every mission in the Leigh Johnson strand except "The Assault on Fort Mercer" begins at this location, in his office. The mission "Old Swindler Blues" ends here and leads directly to the beginning of "You Shall Not Give False Testimony, Except for Profit". The introduction of Irish also takes place here in the mission "A Frenchman, a Welshman, and an Irishman".

In the midst of the apocalyptic invasion of the Undead, Armadillo has been besieged constantly by the hordes of undead. Everyone is running for their lives and survivors are holed up in the buildings and on the rooftops as the town descends into chaos. Marshal Johnson is desperately trying to defend the town in the name of the law. Everett Knox, Tobias Weldon, Alden Renshaw, Adrienne Lachance, Kittie Crenshaw and Jessie Hargrove are the only survivors that can be found defending the town. Herbert Moon is also present but does not assist in the town's defense.

The side-mission "Dinner For Two" begins and ends here.

This is also the location of Adrienne Lachance, the tenth and final missing person to be rescued in the Fort Mercer segment of the Missing Souls Side-missions.

The town is overrun when approached, and survivors have taken refuge on the roofs of shops as well as the saloon. Marshal Leigh Johnson is residing in his office, pondering a way to clear out the Undead, and awaiting the return of his two deputies. He claims that the Undead have been constantly attacking for some time, and tend to "just disappear" after a while, only to attack again later. He then requests Marston's help in finding his deputies and clearing the town.

Armadillo has an active railway station with a telegraph office, where the player can pay off his bounties with either cash or a pardon letter. There is also an animal pen along the railroad where livestock such as sheep and cows are kept and loaded onto the railway carriages for shipping. Lawmen post wanted posters of criminals on the south wall of the station. The town's newspaper salesman also sells newspapers outside the station. Five Finger Fillet is played here, and Marston can join in for some competition.

Across the street from the Telegraph Office and Railway Station, is the Armadillo Saloon. The most popular establishment in town. Residents of Armadillo, weary travelers, ranchers, and brooding cowboys come from all over to drink, socialize, or find a place to rest. Local criminals, gang members, prostitutes, and drunkards are also common. The saloon has a large room with tables and chairs for visitors, a bar for drinks, a kitchen for food, a piano player playing music, a bathroom, the bartender's bedroom, and a private poker room where you can buy into a game of Texas hold'em for $25. Upstairs is a mezzanine hall and sitting area where rooms are available for travelers to have a rest or entertain the resident ladies. Marston can purchase a safehouse for $50 here. There is also an accessible balcony upstairs.

Across the main street from the saloon, is the freight station which contains a post office and an area where stagecoach services are found. Next to that is the general store, owned by Herbert Moon. The player can purchase their most basic needs from his store - campsites, maps, horses, etc. - as well as being able to sell their goods for money.

Next door to the saloon resides gunsmith Jeb Murphy, where the player can purchase weapons, hunting bait, and ammo. As well as being able to sell provisions here for instant cash. Further along, is an inaccessible barber's shop and dentist, and neighboring that is the town's doctor Nathanial Johnston, who helps John Marston after his first encounter with Bill Williamson at Fort Mercer and can sell Medicine to Marston, and similar supplies throughout the story.

Across the street from the doctor's office is the Bank of Armadillo, where large sums of money are secured in the safes inside. Marston can rob the bank to gain money, but at the cost of retaliation from the law and penalties to honor. Down the street is a row of two-story residential buildings. On the far side of town are the Sheriff's office and jail, more houses, and a schoolhouse used as a movie theater where Marston can watch a short film for $2.

To the rear of the town, behind the saloon and gunsmith, is the livery. Here, livestock such as cattle is kept in a large pen outside. There is another, smaller pen and a barn for horses, as well as a chicken coop outside the blacksmith's large shed which is found in the center of the area. There is also a small shooting range, where players are free to shoot at the targets.

These following information only pertains to Red Dead Redemption. 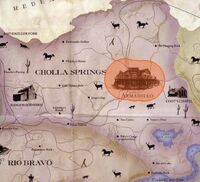 A detail of the saloon interior.

Another detail of the saloon interior.

A poster you can get in Red Dead Redemption 2.

One of many Cholera notices around Armadillo during 1907.

A victim of Cholera.

The Saloon in Armadillo, desolate due to the Cholera plague. 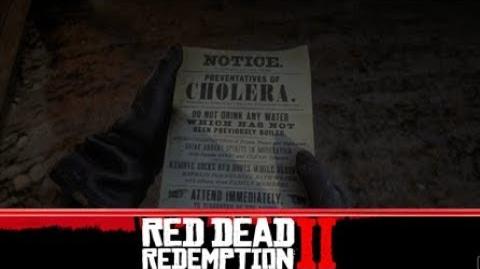