Armadillo's train station was established at some point prior to 1898. It is part of the rail network of the South Western Railroad Company.

In 1898, the station's post office is still in operation and can be used by the player.

When visiting Armadillo in 1907, the post office is out of order and locals infected with cholera can be seen using it as shelter.

During the events of the first game, the town has recovered from the previous epidemics and the train station is back in operation. However, the player can only use it to pay off his bounties. 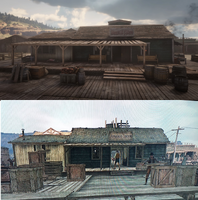 The back of the station in both RDR and RDR2

Retrieved from "https://reddead.fandom.com/wiki/Armadillo_Station?oldid=398179"
Community content is available under CC-BY-SA unless otherwise noted.