At Home with Dutch/dialogues
“We must try to reason with them, sir. Van der Linde's gang contains several natives. We must meet with them and try to save them from disaster.”

“My people have already endured many disasters. Before, this was all our land.”

At Home with Dutch is the forty-fourth mission in Red Dead Redemption.

John Marston is visiting Harold MacDougal when Nastas enters and says he knows where Dutch Van Der Linde and his gang are located, and that young men from the reservation are joining him and performing mischief, and that he and his gang are holed up in the hills in Cochinay. The three head out after the gang.

John must get on his horse and follow Nastas to the quest location. Upon arrival, the Professor will submit to his fear of the outdoors and flee, leaving the player alone with Nastas, which begs the question of why he even goes in the first place.

Simply approach Nastas; a cutscene will show John climbing on top of the cliff before helping Nastas up. There will be a wooden wall that, once Nastas has gone over, will be impossible for Marston to climb. The player will have to climb a few steps left of the wooden wall. After climbing two low rocks, there will be a small cliff on the wall that is possible to hold onto by jumping at it. The player then has to hold onto this as they move across the large gap. Upon reaching the other side, just follow the path to Nastas.

Follow Nastas as he leads John into some old mining caves. A cutscene will spark, showing him being attacked by an insane miner and cut in the arm before killing him. A cart filled with TNT will roll into the cave, and as the player rushes outside, three men will be waiting to surprise John. Take them out and approach Nastas, who will say he is too injured to carry on, before telling John to go on without him.

Go to the yellow marker on the map and begin climbing. Simply follow the path from here on, as there's really just the one way the player can go, and simply climb. After a couple of climbs, there will be a faceoff with a grizzly bear. A good tactic is to take out a shotgun and use Dead Eye. To make sure, paint two hits in his head, but one close-range with the shotgun should be enough. After taking care of it, keep climbing. Eventually, John will come to a plateau with a dead Big Horn and a curved piece of rail track leading to a closed entrance on his left. Watch it, there's a cougar up here. After killing it as well, move over to the next yellow dot and keep climbing. There aren't anymore dangerous animals, only a harmless eagle that will take off once Marston climbs the ledge.

Upon reaching the top, the player will see Helaku, who is acting as a scout. He will have to be dealt with, silently. This rules out all weapons except for the more subtle ones. Use Throwing Knives, the Hunting Knife, or the lasso to take him out. The player then picks up his binoculars. Simply find evidence of Dutch van der Linde in the camp, which isn't too hard. Just pan a little left, and he should emerge from a tent and end a lawman's life. Immediately afterward, Dutch will spot and shoot at John, but he misses and hits only the binoculars, knocking John out.

The player will wake up back in Blackwater with MacDougal and Nastas, and after a short cutscene, the mission is over.

Main article: At Home with Dutch/dialogues 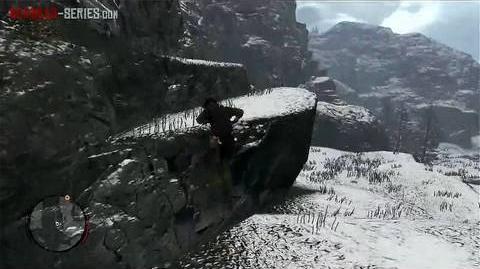 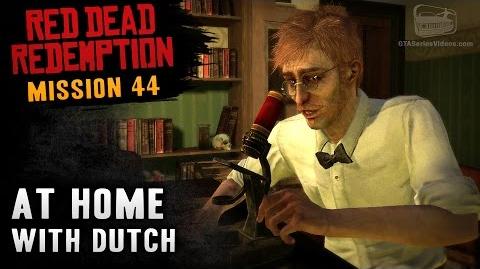 Retrieved from "https://reddead.fandom.com/wiki/At_Home_with_Dutch?oldid=412565"
Community content is available under CC-BY-SA unless otherwise noted.