Julian Fletcher
“Carries brass knuckles wherever he goes, not like that he needs them.”

This character is not playable in the Showdown Mode.

Atlas is a circus strongman and serves as a bodyguard for Professor Perry. His size and muscle make him slow.

Atlas is a mini-boss in the mission "Freak Show". He only attacks Jack Swift if he approaches him. He walks around slowly after the player and does nothing other than raising his shield to protect himself. If he gets close to Jack, he will back away and come back again or hit him with his shield. If the player goes behind the burning building, Atlas will follow him. If shot, he raises his shield up to protect himself. Other than that he does nothing, so he poses a very minor threat despite being Perry's bodyguard. The player can even ignore him and attack Perry directly, as there is no penalty for doing so. However, he has to be killed in the Bounty Hunter Mode mission for the bonus. Melee attacks next to him do nothing, and will only get Jack rammed with a shield.

Atlas' page is unlocked when the player purchases the Lantern from the Brimstone Gunsmith despite there being no relation to him. He is listed in Sheriff Bartlett's Journal under the Professor Perry's Potions & Peculiarities section.

The image there shows Atlas being over 7 feet tall, however he appears average in size in the game. 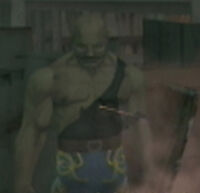 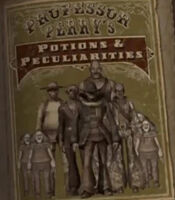 Jones standing right behind his boss.
Add a photo to this gallery

Retrieved from "https://reddead.fandom.com/wiki/Atlas_Jones?oldid=400859"
Community content is available under CC-BY-SA unless otherwise noted.