Lobo the Wolf can be found at this location as part of the Rank 10 Master Hunter Challenge for Red Dead Redemption. In Red Dead Redemption 2, the Legendary Rock Bass inhabits these waters exclusively. Most commonly, the player can find foxes, cougars, beavers and bears.

In Tall Trees, a river flows north through the forest, and at the end is the Aurora Basin. The dense forest opens into a large clearing, revealing a sizable lake. The basin was most likely used as a hunting or fishing retreat, as a nearby cabin suggests. However, the shack appears derelict, and therefore suggests it has been abandoned. The water in the basin is shallow enough for wading, providing a potential escape from pursuing animals.

In Red Dead Redemption 2, the area is more or less unaltered apart from the waterfall, which is missing or has been removed from its spot in Red Dead Redemption. The hunting/fishing cabin is in a slightly more decrepit state than it was in Redemption - parts of the wharf and the stairs leading to it have fallen into the basin, and the deck around the cabin is collapsed in sections.

Aurora Basin may be based off Mono Lake which is west of Yosemite National Park in California. The shape of both lakes are similar to one another and have similar geographic locations 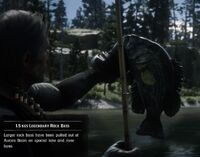 The Legendary Rock Bass can be caught in the lake in Red Dead Redemption 2.

An old photograph of Aurora Basin