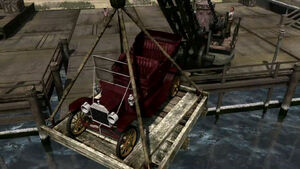 “Such an elegant way to travel. What do you think of this automobile, Mr. Marston?”

The Automobile is an extremely rare and progressive form of transportation featured in Red Dead Redemption.

While the primary mode of in-game travel is on horseback or by a horse-drawn carriage, as the player progresses through the game, the creeping onset of modernization will make itself known, especially in Blackwater. Automobiles are still a rarity in 1911 and cannot be independently driven by the player, but they still play important roles in several main story missions.

Automobiles were not produced in any significant numbers, having only been commercially available less than a decade prior; automobiles would have been considered rare contraptions. All in-game automobiles are lightweight except for the red Model-T.

A Ford Model-T is seen being unloaded at the Blackwater docks during the introduction cinematic. The same vehicle is seen parked beside an automobile repair shop on a street in Blackwater.

Edgar Ross and Archer Fordham use an early burgundy Ford Model-T as their primary mode of transportation. Players are obligated to ride as a passenger in the vehicle in several gameplay missions.

Players will also encounter an early Darracq 'Perfecta' automobile that has been modified with steel armor plates and a Maxim Gun. This vehicle appears only once in the Edgar Ross mission "And You Will Know The Truth", with Marston manning the Maxim gun mounted in the bed.

Dutch van der Linde owned or stole a burgundy Ford Model-T which he used to kidnap a banker and eventually crashed in the Edgar Ross mission "Great Men are Not Always Wise".

One of the earliest production automobiles of the 20th century, an armored Darracq 'Perfecta'

An automobile can be found in Blackwater, but it cannot be driven by the player. It should be noted that the car is parked next to an auto repair shop.

John Marston with a Browning Gun in an automobile
Add a photo to this gallery
Retrieved from "https://reddead.fandom.com/wiki/Automobile?oldid=399160"
Community content is available under CC-BY-SA unless otherwise noted.