View source
“You need me. I know what needs to be done.”

Ayauhtéotl is a major character featured in the Red Dead Redemption Undead Nightmare DLC pack. While omnipresent throughout the game, she is specifically encountered during the mission "A Civilized Man."

Ayauhtéotl was the Aztec being, force or Goddess who controlled mist, smoke and most particularly Crepuscular rays, the dark and light beams that appear under the right condition at sunset. She was also the Goddess of fame and glory.

It appears that when Abraham Reyes stole a sacred artifact, in this case the Mask, she took human form to retrieve it. The Mask was cursed, reanimating the dead and a magical plague with them. It seems that she can disappear when she is in god-form. She has the ability to command the Death horse and lift the plague once her power is restored. Yet, in human form, it appears that she is mortal, and fears being killed by the Undead Reyes.﻿

She first appears as a woman that is in both groups of survivors in Blackwater, then again with the Sasquatch Hunter. She also appears in the opening cutscene of the survivor mission "Dinner for Two" as she can be seen looking through the window. She later is seen in the opening cutscene of the "Missing Souls" mission. After John Marston meets Mother Superior, she again appears as a nun. Mother Superior tells him that the nun had told her that the curse was caused by Abraham Reyes, who disturbed an Aztec curse after retrieving something.

When John tracks Reyes down, he finds the zombie Reyes chasing this same woman around a table. After Reyes is dispatched, she shows John the Mask that Reyes took. Whilst taking him down to the crypt, her behavior becomes increasingly unusual, mentioning the zombies' anger and ancient curses while John notices that the Undead aren't attacking her. Much to John's surprise, she also quotes Jack on the story that he was reading: "Some people worshipped the moon, and the brave man has to kill everyone...". Upon reaching the Altar, she tells John to return the Mask and disappears as he does so. She says her name is Ayauhtéotl and a horse is waiting for him outside so he can return home. The horse is Death, one of the Four Horses of the Apocalypse.

Ayauhtéotl appears with this first set of survivors Marston encounters in Blackwater...

Ayauhtéotl spotted with the Sasquatch Hunter.

Though difficult to see, Ayauhtéotl appears at the window during Marston's conversation with Leigh Johnson in the side-mission "Dinner for Two".

Ayauhtéotl appears briefly at the beginning of the side-mission "Missing Souls".

And finally, Ayauhtéotl appears in Las Hermanas as a nun so that she may give advice to the Mother Superior. 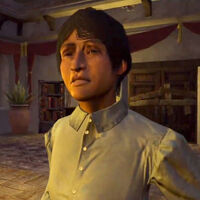