Start a Wiki
“Attracts animals in the vicinity.”

Bait is a consumable item found in Red Dead Redemption.

Bait is used to assist the hunting process by attracting animals that are native to the area. The bait is poured onto the ground where the player is standing.

The bait may only be used when there are no people or towns nearby and only if there are animals in the area. If you do use the bait in such an area, a message will pop up stating that you must move away in order to use the bait, you will not lose the bait you attempted to use.

Once poured successfully, a pool of blood red liquid will be placed upon the ground and a message will pop up notifying you to move away from the bait so that you do not scare away any animals that are being attracted to it. After a quick look at your mini-map, you will see a green dot, similar to the red dot shown to indicate hostile enemies. This green dot indicates the location of your bait.

Be careful as you move away from the bait, as there may be some predatory animals such as cougars and wolves who could be attracted to you rather than the bait. Cougars are especially hard to spot in some situations as the they make little noise and usually hunt alone. As for wolves, they hunt in packs of 3 or more, so smart use of Dead Eye and a proper weapon will usually dispatch those packs who seek you as prey. Using bait in Great Plains is also one of the only ways to attract, kill and skin regular bears as opposed to the more common grizzlies in Tall Trees. Using bait near the main gate of Cochinay occaisionally attracts a heard of buffalo even after the supposed extinction of buffalo.

After the bait has been placed and the player is a safe distance away, a number of animals will approach the bait. These animals are typically native to the area, but not always. Keep in mind that the corpses you leave behind after skinning can attract other animals to the scene; this can be a good or bad thing depending on the player's intentions.

Bait makes it very easy to attract animals needed for the Sharpshooter Challenges and the Master Hunter Challenges. Look for the animals picture on the world map and go to that area. Once there, pour some bait on the ground and see what animal comes. It will not always be the one you're looking for but your best bet to find the animal you want is in the area where it shows that animals' picture on the world map. The bait does not work on birds.

Bait can be purchased for $15 each at a Gunsmith.

Initially five may be held in the players inventory. Once completing rank 10 of the treasure hunter challenges, the satchel is upgraded to accommodate double (ten) of all consumables (except survivalist maps). 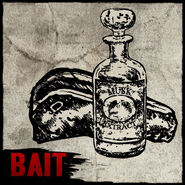 Retrieved from "https://reddead.fandom.com/wiki/Bait?oldid=388236"
Community content is available under CC-BY-SA unless otherwise noted.