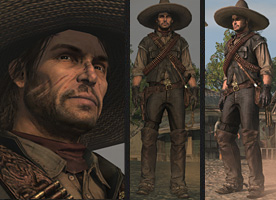 The Bandito Outfit is an outfit available to be worn by Marston in Red Dead Redemption. The Bandito outfit is one of the nine required for the 100% game completion statistic.

Wearing the Bandito Outfit allows the player to be disguised as a Bandito and thus be treated like one of their gang whenever they're encountered, except in Fort Mercer. The outfit consists of John Marston's Cowboy Outfit, with two bandoliers, and his typical flat top, medium-sized brim black hat, replaced by a wide-brimmed sombrero, along with bigger Mexican boots.

To unlock the Bandito Outfit, the player has to complete the following challenges:

Scrap 1: Search Sidewinder Gulch. Looking at the map, you need to head to the more spacious area (closest to Plata Grande to the East) with three black squares. Inside this area is a camp, in which the tent on the far east side contains the scrap in a chest.

Scrap 3: Defeat all players in a round of Liar's Dice in Casa Madrugada.

Scrap 4: Capture a Bandito Bounty alive (can be obtained at Escalera, Chuparosa, and El Presidio).

Scrap 5: Defend Mexican residents from Bandito attacks (If you only have scrap 5 left, then you can simply track its location to show you where Banditos are attacking. It can also be done in the southern part of New Austin.)

Scrap 6: Purchase at the general store in Chuparosa. 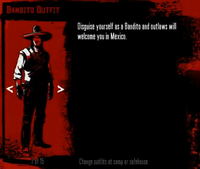 Obtaining the Bandito Outfit will contribute toward acquisition of the following Achievement/Trophy:

Retrieved from "https://reddead.fandom.com/wiki/Bandito_Outfit?oldid=388240"
Community content is available under CC-BY-SA unless otherwise noted.