Banking, The Old American Art is a mission in Red Dead Redemption 2. It is the final mission of Chapter 4.

The gang prepare to rob the bank in Saint Denis as one final score that would allow them to retire.

In order to fund their escape overseas and retirement from the life of crime, the gang prepare for one last job: robbing Lemoyne National Bank in Saint Denis. Although the robbery starts off well, Pinkertons quickly arrive on the scene. Hosea is held hostage after being captured by Agent Milton during the distraction that he orchestrated. Knowing that Hosea had not and would not agree to his deal of handing over Van der Linde, Milton decides to kill him, doing so with a shot to the chest. A shootout ensues between the gang and the Pinkertons.

With the gunfight unwinnable, Dutch has Arthur plant dynamite on the wall inside the bank, allowing the outlaws to escape to the rooftop and escape. While the rest of the gang are escaping, John is captured alive by Pinkertons and later sent to Sisika Penitentiary to be incarcerated. Along with this, Lenny is killed by Pinkerton gunmen during the escape on the rooftops. The remaining six - Dutch, Arthur, Micah, Bill, Javier and Charles - hide in an abandoned apartment and wait until night to escape. Dutch decides to escape on a boat and leave the country, so the six proceed to the docks. Along the way, Charles distracts some Pinkerton guards and allows the other five to enter a boat bound for the South Pacific. After a few days at sea, a torrential storm sinks the ship, and the men wash ashore on the island of Guarma. 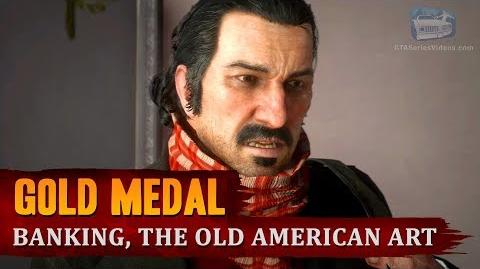