Uncle tells John that he has heard that Charles Smith is alive and in Saint Denis. John and Uncle go to Saint Denis to track him down.

At Beecher's Hope, John visits Uncle, who is lazing around inside the shack. After being berated for his laziness, Uncle reveals that Charles Smith is alive and in Saint Denis. The two then catch a train headed for Saint Denis.

Once there, Uncle says that he will search the saloons for Charles and asks John to search the slums. However, John tells him that the opposite will happen, and proceeds to check the saloon or the fence. Regardless of which one is chosen, John hears that a "big Indian" is at a boxing match taking place in the slums, and tries to find Charles there. Instead, John is greeted by Uncle, and the two look around for Charles. Soon afterwards, John sees Charles talking to an organiser of the match. Charles is shocked at seeing John, telling him that he thought he was dead. Before the two can say much more to each other, Charles is called over by a bookie to bet, and Charles bets on himself. Shortly thereafter, Charles is called over to begin the fight, while the bookie offers John a chance to bet on either Charles, or his opponent.

Once this is done, the referee introduces the two fighters: "Simon of Wales" and Charles, before explaining the rules. The fight then commences, in which Charles quickly gets the upper hand. The player can choose to cheer on Charles or boo, though, no matter which one is done, Charles manages to win the fight. Immediately afterwards, Charles quickly gets dressed and leaves the area, quickly receiving his money from the bookie (as will John, if the player betted for Charles) on his way out.

Charles tells John that he needs to get his bag from the dockside, while Uncle tells them that he has "a few errands to run", and that he’ll be back shortly. As they walk through the streets, John and Charles talk about Arthur, before John tells him that Micah had betrayed the gang, and Charles tells John that Leopold Strauss was arrested by Pinkertons and tortured for information about the gang, eventually dying in custody. When they reach the docks, Charles gets his bag, but they are confronted by four of Guido Martelli's men (who are looking for revenge on Charles after he promised to throw the fight, but instead won it and took the betting money). As they are threatened, John and Charles dive behind cover and quickly dispatch the men, before absconding with a wagon, which Charles drives. On their way out of the city, Charles explains that they must evade capture at all costs, due to Guido Martelli having the Police Chief "in his pocket", and that they "won’t get out of the interview room". John and Charles eventually make it out of the city without being caught, and get greeted by Uncle. With that, the three head back to Beecher's Hope. 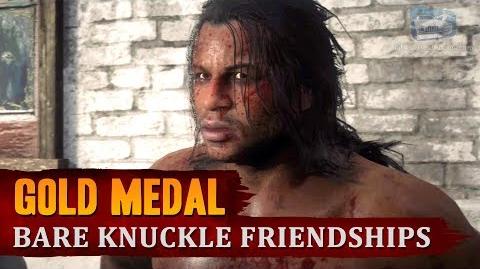 Retrieved from "https://reddead.fandom.com/wiki/Bare_Knuckle_Friendships?oldid=414500"
Community content is available under CC-BY-SA unless otherwise noted.