Barrel Rider is a point of interest in Red Dead Redemption 2.

At the base of a waterfall in Ambarino lay hunks of shattered wood and a broken corpse—that of Desiree LaFlamme who perished in an attempt to ride a barrel over the falls and died as a result. The Stunt is publicized on a poster at Emerald Station. "Desiree LaFlamme Queen of the Rapids" 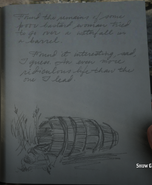 Arthur's drawing: "Found the remains of some poor bastard woman tried to go over a waterfall in a barrel. Found it interesting, sad, i guess. An even more ridiculous life than the one i lead." 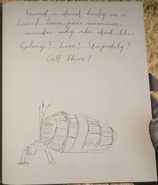 John's drawing: "Found a dead body in a barrel. Some poor woman, wonder why she did this. Glory? Love? Stupidity? All three?."